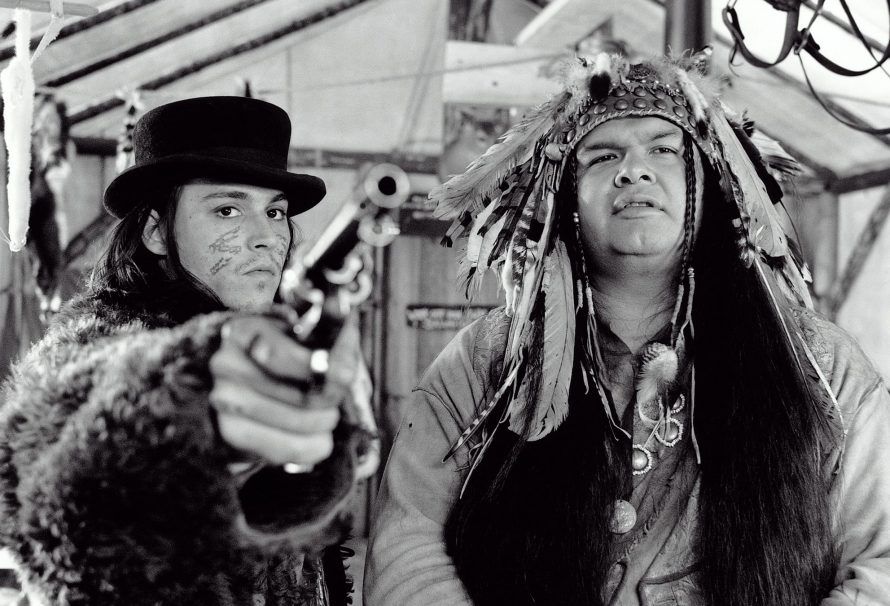 Welcome to Harvey’s Hellhole, a monthly column devoted to spotlighting the movies that were poorly marketed, mishandled, reshaped, neglected or just straight-up destroyed by Harvey Weinstein, during his reign as one of the most powerful studio chiefs in Hollywood. The film for this month’s column was actually suggested by my illustrious editor Jason Bailey, who gave me a few good titles Weinstein mishandled in his trademark, petty-ass way.

Dead Man, Jim Jarmusch’s 1995 alt-Western starring Johnny Depp, is the first and last Jarmusch film Miramax distributed. It’s kinda crazy that Jarmusch and Miramax got in bed together in the first place; after all, Jarmusch is an indie-movie auteur known for making the movies he wants to make, no matter how strange, surreal, or downright bizarre they get. All those things and more happen in Dead, an oddball oater that’s more about the work of English poet William Blake than cowboys having shoot-outs in the Wild West.

William Blake also happens to be the name of Depp’s protagonist, an accountant from Cleveland who travels to a skeevy-ass company town — called Machine — to accept a job promised to him in the town’s metal works. Showing up in a dandy checkered suit, he discovers the position has already been filled. When he tries to reason with the boss (Robert Mitchum, in his final role before his 1997 death), the old man points a gun in his face and tells him to get to steppin’!

A stranger in a strange land, he accepts some kindness from an ex-prostitute-turned-paper-flower-pusher (Mili Avital) who invites him to her room and her bed. Unfortunately, the good vibes are cut short when her ex (Gabriel Byrne) shows up looking to reconcile. A lovers’ quarrel/shootout ensues that ends with the girl getting killed, Blake fatally shooting the ex in self-defense, and Blake — now with a bullet lodged in his chest — on the run.

Blake’s journey as a fugitive has him teaming up with Nobody (Gary Farmer), an ousted, Native American drifter who thinks that because Blake is named after the poet, he is also a reincarnation. All the while, they’re being hunted by a trio of killers — led by Lance Henriksen’s silent-but-deadly cannibal — hired by that metal-works boss. (It turns out the ex was the boss’s son.)

Like so many Jarmusch films, Dead is an esoteric, eccentric tale of unlikely people coming together and reaching common ground while on the road. Blake and Nobody become literal partners-in-crime, wiping out the lawmen and other nefarious folk (sometimes by accident) who come after the reluctant outlaw. But, since this is a Western, Jarmusch uses this as an opportunity to slyly remind viewers how our country, a land once covered with trees, animals and indigenous peoples, was built (and continues to run) on fear, paranoia and bloodshed. He’s actually quite blunt about it in one instance: When Blake discovers a loaded gun underneath a pillow in that girl’s bed, he asks her why she has it. Her response: “Because this is America.”

Shot in black-and-white and featuring an echoing, electric guitar-heavy score from Neil Young, Dead also has a fascinating, international cast playing an assortment of rude rogues (several of them named after musicians and record producers who I’m sure are friends of Jarmusch’s). Not only do you get John Hurt and Alfred Molina in brief roles, but you also have Iggy Pop, Billy Bob Thornton, and Jared Harris playing a rather crusty trio who almost have their way with Blake in one scene.

Also, like so many Jarmusch films, Dead moves at its own weird, quirky pace. Hell, the first nine minutes has Depp riding a rickety train en route to Machine, doing myriad mundane things to pass the time, including having an intense conversation with the train’s soot-covered boilerman (Crispin Glover — of course!). As you probably expected, Weinstein wanted to make some cuts. But Jarmusch, who owns all his films and makes deals with distributors to release the finished product, wasn’t going back to the editing room. (He already trimmed a bit — without Weinstein’s input — after it premiered in Cannes that year.)

Yeah, Harvey didn’t like that. When it eventually hit theaters a year later, he allegedly retaliated by restricting press screenings and giving the film minimal promotion & publicity. The $9 million film ended up making a paltry million at the box office. “He released the film ‘with tongs,’ as the critic J. Hoberman put it,” Jarmusch told the Guardian in 2004. “We had a problem because I sold him a finished film that was produced by my company, and then he wanted me to change it and I’d already signed a contract that he was distributing the film as is. He just bullied me, and I don’t like bullies.”

According to a Los Angeles Times article, Jarmusch publicly spoke of the sabotage during the 1997 New York Critics Circle awards dinner, when he gave a prize to Breaking the Waves cinematographer Robby Muller, who also did cinematography for Dead:

“Dead Man had been seen at more private screenings than public ones, he said–suggesting that it had received inadequate support in the marketplace. The director’s comments were greeted by a round of applause–a reflection of what some in the movie industry see as a resentment toward Miramax’s style and success.”

Weinstein was ready to clap back. “With an art-house movie, you rely on the critics and promotional support from stars,” he said in the same LA Times article. “Seventy percent of the reviews were mixed to negative, and in the U.S., Johnny Depp basically just came to the premiere.”

As Jarmusch later told the Guardian, he and Weinstein eventually kissed and made up. “He apologized and sent me a bottle of champagne and said, let’s not disrespect each other in print, and I said, OK, let’s let it go now.”

Even if he didn’t torpedo the movie’s chances of finding an audience, Weinstein probably would’ve had a hard time selling this film. Unless Clint Eastwood had something to do with it, Westerns weren’t big draws in the explosion-filled ‘90s. (See Wyatt Earp, Posse, The Quick and the Dead, etc.) And I’m sure those who dig Westerns would’ve been baffled by Dead and its elegiac, existential tone. (This movie would’ve been right at home in the ‘70s, alongside such trippy, revisionist Westerns as Robert Altman’s McCabe & Mrs. Miller and Sam Peckinpah’s Pat Garrett and Billy the Kid.)

Nevertheless, Dead does have its fans. Jonathan Rosenbaum loved it so much, he wrote a BFI monograph on it, while Greil Marcus called it “the best movie of the end of the 20th century.” And, yes, it got the Criterion Collection treatment back in 2018. Dead Man sure wasn’t a major success for Miramax, but, like all the films in the Jim Jarmusch canon, it gained a cult following even Harvey Weinstein couldn’t keep away. Stupid fucking white man.

“Dead Man” is available to stream on The Criterion Channel and HBO Max.