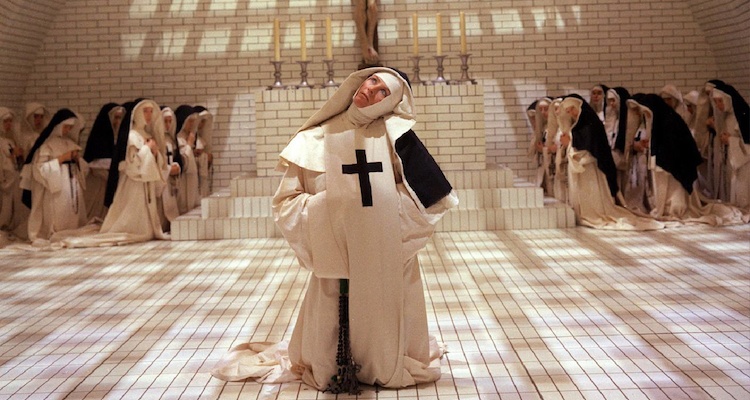 The first image we see in Ken Russell’s The Devils is one of comedy: King Louis XIII of France prances about on stage, wearing a string bikini that leaves little to the imagination, in a pantomime of the Birth of Venus. Below him, a bored audience of high-court sycophants sends up the bare minimum applause.

Power is a farce and the Emperor literally wears no clothes.

The last image we see in Ken Russell’s The Devils is one of stark horror: a catatonic woman traverses the ash-covered wasteland of a once great city, surrounded by death and decay. She climbs over the rubble and heads down the open road, her future certain only in the sense that there’s nothing awaiting her save more of the same.

In the hour and 48 minutes spanned by these two starkly different images, we watch as power-hungry elites spark the flame of nationalism until it grows into a blaze that devours everything in its path. It does not matter that the King is a fool—when the forces of fascism seize power, the end result is always going to be a holocaust.

The story of The Devils (based on true events and adapted from both The Devils of Loudun by Aldous Huxley and The Devils by John Whiting) is well documented: heavily edited upon release in 1971 before being given an X rating in both the U.S. and the U.K. due to its graphic depictions of sexual violence and sacrilegious imagery, Warner Bros. has failed to give it any kind of proper home video release in the intervening years (initial releases on DVD and iTunes were pulled with no explanation).

Recently, there has been a resurgence of interest in the film, thanks to high-profile showings at film festivals and repertory houses. Now, with its surprise release on the horror streaming site Shudder, the film is finally available (albeit still in edited form) for the first time since its initial theatrical run.

This release couldn’t have come at a more suitable moment. So much of what’s been written about the film concerns its troubled distribution history and the nature of its shocking content. That’s more the pity, because The Devils is a top-to-bottom masterpiece: visually breathtaking thanks to the lush cinematography, epic set design, and bold costuming, it also boasts a handful of career-best performances, including from its dual leads of Oliver Reed and Vanessa Redgrave. Any one of these factors would be enough to make The Devils required viewing, but where the film draws much of its power today is from the immediacy of its story and thematic concerns.

In the wake of the great religious wars between the ruling Catholics and a Protestant minority, the ambitious Cardinal Richelieu manipulates King Louis into allowing him to seize control of the city-states throughout the land. His plan meets formidable resistance in Loudun, the only city in which the Protestant majority stayed loyal to the King, and which managed, thanks to the leadership of its recently departed Governor, to keep the peace.

But while its grand fortifications have kept Loudun safe from outside forces, they’ve created a combustible mix of resentful elements within. These explode once the late Governor’s right-hand man, Father Urbain Grandier (Reed), attempts to take up the mantle of leadership.

It is not out of political miscalculation that Grandier dooms himself, but through a combination of personal hubris and forces outside of his control. Equal parts true believer (we first meet him delivering a powerful funeral mass for his predecessor) and scoundrel (the next scene finds him in bed with a local Magistrate’s young daughter, who he callously—and hilariously—dumps as soon as she reveals to him that she’s pregnant), Grandier is a predecessor to Bill Clinton and Tony Soprano alike: his capability and charisma are undercut by his reckless appetites and stubborn pride. Even as he seeks to lead his community, he ends up creating a powerful network of political enemies, which Cardinal Richelieu and his envoys seek to take advantage of in order to bring Grandier—and by extension, the white walls of Loudun—down.

The true catalyst for Grandier’s downfall turns out to be someone of whom he was completely unaware: the hunchbacked Sister Jeanne des Anges (Redgrave), who rules over the local order of Ursuline nuns with steadfast sadism. She stands (or, rather, hunches) in contrast to Grandier: whereas he dispenses with dogma in favor of robust civic action, Sister Jeanne forsakes the outer world for a subterranean existence that subsists on repression and harsh discipline. Grandier devotes himself to the transcendent qualities of both the flesh and the Spirit; Sister Jean acts out her secret fantasies in sessions of masturbatory self-flagellation. Grandier strides boldly through his city, stands on high to deliver rousing speeches in its defense, and even meets his brutal end high above the throng. Sister Jean lives in the underground, mental ward-like caverns of her convent, moving about on her knees or bent over underneath the low curves and jutting crescents that form the walls and windows of her chamber in a reflection of her own physical deformity. That is where we first meet her, and that is where we leave her.

And yet, it is not out of hatred or even opposition that she ends up being the one to destroy Grandier, but rather love. Secretly obsessed with him, despite having only ever glimpsed him from afar, when she discovers that he’s secretly taken a wife in defiance of his priestly vows her mind completely breaks. She publicly accuses him of being possessed by the devil and makes up stories of him subjecting her and her sisters to satanic ritual sexual abuse. These charges, though clearly the fiction of a deranged min, give the Catholic authorities the excuse they need to prosecute Grandier.

And yet, as bleak a vision as all of this amounts to, the film is no mere exercise in nihilism. A warning cannot, by its nature, be nihilistic. If The Devils was not initially conceived as a warning, it certainly serves as one now. When Grandier makes an impassioned speech to the members of Loudun, it is hard not to think of our own current, post-election circumstances:

“Every time there is a so-called ‘nationalist revival’ it means one thing: somebody is trying to seize control of the entire country…when a man is intent on power…he can justify it with any absurdities!”

Yet, easy and enticing as it is to make 1:1 comparisons between the characters and events of the film and the people and events of our modern political landscape, the truth is The Devils feels timely because its story is timeless. It’s one that we as a species have enacted time and again—from the literal witch hunts of 17th-century Loudun and Lisbon and Salem, to the political witch hunts of the 1950s, to the modern-day attempts of the current right-wing resurgence centered around nationality and religion.

Ken Russell’s The Devils is by no means a polemic (it is too funny and, ultimately, moving, to be such), but it does serve as dark mirror to the modern day. Now that we finally have the chance, it would serve us well to take a deep and unblinking look into it, frightening though it may be to see our own reflection within.