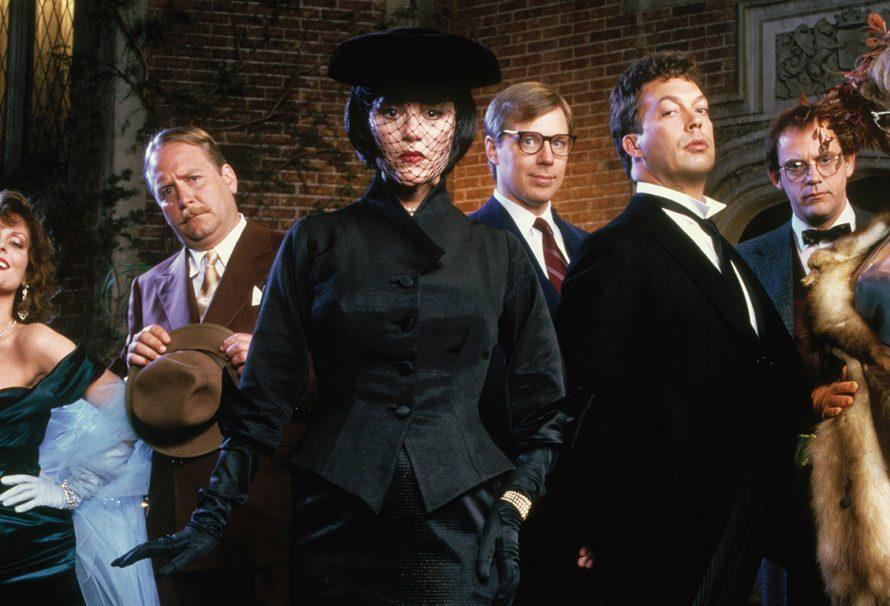 As we speak, there are probably zoom sessions full of studio executives trying to figure out the best way to adapt board games into feature-length films. Established properties are less of a gamble than original content, and the nostalgia factor for audiences  with fond memories of sitting around the kitchen table destroying relationships with loved ones over Candyland or Monopoly is a powerful draw. But as a genre, board game movies are tough to pull off; we need look no further than the disastrous Battleship to see all the ways it can go wrong. That’s why Clue stands out: it serves as a shining example of how to make a Hasbro movie work. It may not have set the box office aflame when it first came out, but now, on its 35th birthday, it has a proud cult following and is not just a great board game adaptation, but a classic black comedy in its own right.

The cinematic version of everyone’s favorite murder game was envisioned by director Jonathan Lynn as a take on the classic drawing room mystery of the 1930s and 1940s, set in a forbodingly isolated mansion in Cold War-era New England. Clue is packed with actors who were known for their comedy then, but have grown into legends in the years since, including Madeline Kahn, Michael McKean, and Tim Curry. A group of strangers assemble for a dinner party, only to learn that they’re all being blackmailed by the same person: their host, Mr. Boddy. Naturally, a healthy spate of murder ensues.

Clue was something of a disappointment for Paramount, receiving mixed reviews from critics and failing to earn back its $15 million budget. Many criticized the fact that it was released to theaters with one of three potential endings as just a shallow gimmick. For whatever reason, its comic sensibilities didn’t connect with audiences in 1985. But like so many other films from the 1980s that were, shall we say, an acquired taste, it found what would become a cult following when it was released on home video. There, with all three endings presented in tandem, its quirky sensibilities were better appreciated.

This interpretation of a classic murder mystery works because it leans into the natural eccentricities of a cast of characters that would somehow find themselves caught up in a blackmail plot while at a dinner party. It doesn’t just embody their inherent weirdness: it celebrates it. Wadsworth’s frenetic energy, Professor Plum’s lasciviousness, Mrs. White’s instability — they’re all given space to shine within a traditional “whodunit” narrative. The seriousness of the situation is occasionally highlighted, with help from an ominous score and a truly deranged plan to split up into groups of two to search the mansion, but is more frequently underplayed. Clue is much more likely to have its characters make glib comments about each of the murders than give into melodrama; they might be fazed by the series of untimely deaths unfolding around them, but the entire thing is moving at such a breakneck speed that they simply don’t have time for it.

While Clue begins with something of a slow burn, with each member of the party anxious to learn why they’ve all been brought together, it increases in urgency until it hits a crescendo in the third act. The film seems like its being played at 5x speed, and Tim Curry as Wadsworth is literally sprinting from room to room in an effort to reenact each killing . We’ve seen the somber murder mystery before, with an atmospheric rainstorm and a mysterious cast of players who all seem to have secrets, but this is something new. A blend of screwball comedy, improv, and the macabre gives Clue an incredible vitality, in spite of all the dead people.

The performances get a lot of credit in Clue, and rightly so: it features an incredible cast of comedians having the time of their lives. But that often means that the visual elements of the film run the risk of going overlooked, and that just isn’t fair. The mansion is a living creature, eerie and richly textured. It somehow imbues the entire proceedings with a sense of Cold War paranoia and a dark anxiousness that envelopes everything. But Lynn almost never gets credit for how cleverly he develops the geography of the mansion. The key concept of Clue as a game is the layout of all those rooms, and each unique potential backdrop for violence. The film executes this with a sense of visual space so detailed and logical and consistent that it almost feels as though it’s laid out before us, like we’re playing the game ourselves. Each room has not only its specific designated place on the map, but its own personality.

In the years since its initial release, Clue has reached classic stature among many viewers. We can see its influence across popular culture, especially in films like Knives Out, which embraced a similar style of irreverent humor in its murder plot. Conversations about exhuming Clue run rampant, with everything on the table from a Gore Verbinski adaptation in 2011 to a big-budget murder comedy starring Ryan Reynolds. The latest word is on a version helmed by The Muppets director James Bobin, although nothing concrete has been released. But whatever ends up happening will be met with mixed emotions from fans. On the one hand, it’s impossible to recapture the energy that made this weird little movie so endearing. But at the same time, Clue served as a showcase for some of the best comedy performers of the 1980s, and it’s difficult not to get excited at the prospect of seeing a new generation of talented comedians take these beloved characters and make them their own.

The Sabotage of Freaked and its Rebirth as a Cult Classic

Why Five Easy Pieces is Jack Nicholson’s Most Underrated Performance