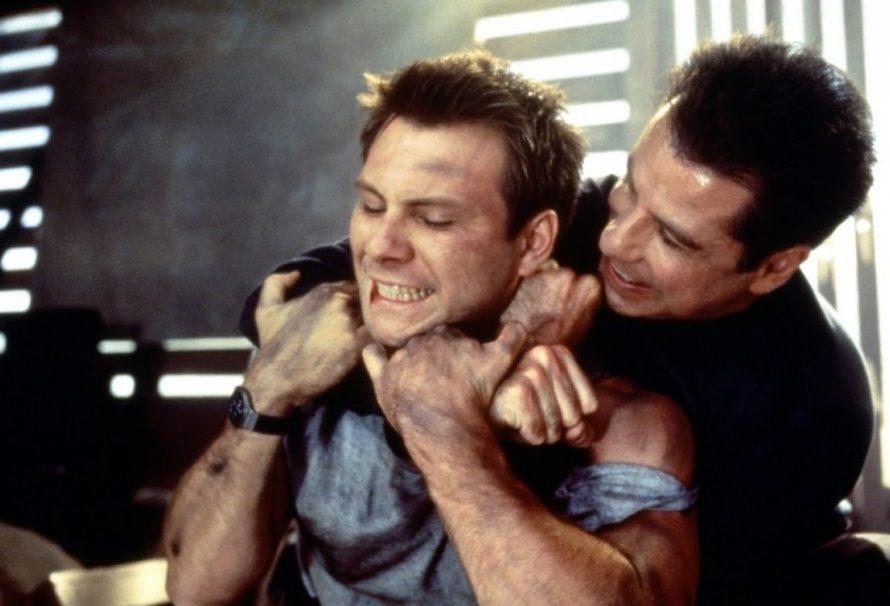 If white bad boys were your thing, you ate well in the 1990s. Leonardo DiCaprio and the Pussy Posse—half “a frat house of young men,” half “a kind of former-child-actor brigade,” as described by Nancy Jo Sales for New York magazine, rode high on Leo’s success from What’s Eating Gilbert Grape, William Shakespeare’s Romeo + Juliet, and Titanic. Luke Perry, Jason Priestley, and Jared Leto—all long sideburns and tortured gazes—had TV covered on Beverly Hills, 90210, and My So-Called Life. DiCaprio’s one-time co-star Johnny Depp and River Phoenix exuded the kind of sensitive fragility that made Phoenix’s death such a tragedy in 1993; Ethan Hawke was an original fuckboy in Reality Bites; and Mark Wahlberg appealed if you wanted an actual criminal. But no one put together a one-two-three punch like Heathers, Pump Up the Volume, and True Romance, and no one was the crown prince of that time period like Christian Slater.

Dismiss his whole early schtick as mimicking Jack Nicholson if you like, and you wouldn’t necessarily be wrong; it’s difficult to hear Slater’s “Greetings and salutations” without immediately imagining Nicholson’s expressive eyebrows wiggling in amusement. But the omnipresence achieved by Slater, who got his start as a child actor on One Life to Live, toured nationally with The Music Man, and starred in John Woo’s Broken Arrow, which turns 25 this month, alongside John Travolta and Samantha Mathis, was thanks to more than just his ability to sarcastically deliver a one-liner. There was vulnerability to his misanthropism, a dangerous glint to his wisecracks, and relatability to his bemusement at the myriad disappointments involved in adolescence, and all of that worked together as Slater became the poster boy for Generation X’s lonely, misunderstood, and pissed off. “Chaos is what killed the dinosaurs, darling,” he drawled in Heathers, and if you didn’t swoon, well, were you even a teenager who would later agree with Winona Ryder when she described her life as one big dark room? Or were you happy or something?

That early phase of Slater’s career is a lesson in counterculture image creation, and in building a celebrity brand around omnipresence: You say yes to all the work, whenever the work is offered. Heathers and Pump Up the Volume were both critically praised, the latter in particular for Slater’s lead performance, and the actor leaned in. Young Guns II, alongside some of the hottest young actors of that time: Emilio Estevez, Kiefer Sutherland, Lou Diamond Phillips, Viggo Mortensen. Robin Hood: Prince of Thieves, with A-listers Kevin Costner, Morgan Freeman, and Alan Rickman. The animated FernGully: The Last Rainforest, one of Slater’s many collaborations with Mathis, and a lesson in exemplary voice acting from Tim Curry and Robin Williams. Tony Scott and Quentin Tarantino’s True Romance, which almost immediately became a cult favorite. Whenever you went to the movie theater, there Slater was: When Kuffs was released in 1992, an Orange County Register profile reprinted in The Baltimore Sun observed that for the “hot Christian Slater,” it was his “12th film in six years.”

“His name is shouted by squealing fans at premieres, his picture appears on the covers of magazines and he reportedly dominated a yet-unreleased Cosmopolitan magazine poll of the most popular young actors in Hollywood,” the profile continued, and the proof is all over Pinterest, Etsy, and eBay, where these magazines are steadily scanned and resold. In the pages of beloved cool-girl publication Sassy in 1988 and on the cover in 1990, with the cheeky cover headline that Slater was “trying to behave.” On the cover of YM twice in 1990 and 1992, plus a special pullout edition in 1992 with the teaser “Christian Slater intimate interview.” Seventeen declared “We love him!” in July 1991. Smash Hits, Movieline, Details, Jackie, The Face, Premiere, Detour, Harper’s Bazaar, GQ. Where wasn’t he?

Of course, fortunes change. Slater stepped into 1994’s Interview with the Vampire after Phoenix’s tragic death, but that was the same year Slater served three days of community service for a gun possession arrest. In 1995, Slater starred in the critically-shrugged-at Murder in the First and was also sued by his former fiancée for palimony. The work kept on coming, but Slater’s offscreen behavior hit its nadir: In 1997, he was sentenced to 90 days in prison for hitting his girlfriend and then fighting with police after a drug bender; he served 59 days and entered rehab. Although Slater mostly righted himself in the court of law (and realm of public opinion), his career shifted into TV-pilot, self-cameo, and direct-to-DVD territory for years before launching to mainstream popularity again with his exceptional work in Sam Esmail’s labyrinthine thriller series Mr. Robot. It’s no coincidence, maybe, that Slater shines so much in it because he’s essentially playing a nihilistic, grown-up version of Jason Dean or Mark Hunter, a.k.a. Hard Harry—another figure burnt out on authority, fucked over by the mainstream, and primarily interested in burning it all down. “Do you ever get the feeling everything in America is completely fucked up?” Slater wondered in Pump Up the Volume, and the direct line between that character and his role in Mr. Robot as the charismatic, idealistic, and increasingly militant leader of a hacker group intent on anti-capitalist revolution is pretty clear.

This isn’t to say, though, that Slater can’t play good guys, because Broken Arrow proved otherwise. In the Woo film, Slater is the straight man to a scenery-chewing John Travolta, who struts, preens, and thoroughly lives it up as a US Air Force major who decides to double cross the military by stealing and selling nuclear missiles after being passed up for a promotion one too many times. Yes, there are broad strokes of narrative similarity between Broken Arrow and Michael Bay’s The Rock, which coincidentally also came out in 1996 and was also scored by Hans Zimmer, and The Rock was the more successful of the two films, garnering more than double Broken Arrow’s take at the box office. But Broken Arrow is so purely, wonderfully a Woo production—all rapid zoom-ins, exhilarating stunt work, and so many fiery helicopter crashes—and Slater and Travolta are doing such unexpectedly oppositional things in it that the film has an array of legitimately enjoyable moments.

The opening overhead shot of Slater and Travolta duking it out in a boxing ring, a clear homage to Neil Leifer’s legendary aerial shot of Muhammad Ali celebrating his knockout of Cleveland Williams at the 1966 World Heavyweight Title fight in Houston. Captain Riley Hale’s (Slater) deadpan delivery of “scare the cows, wake the farmers,” his description for the nighttime flying mission he’ll be manning with Major Vic Deakins (Travolta), during which they’ll be testing the military’s ability to track nuclear missiles on the move. Zimmer’s unexpected incorporation of a musical cue that sounds quite a bit like Angelo Badalamenti’s Twin Peaks score amid otherwise pulsing synths. Travolta’s tooth-first performance, which suggests he was already in the kooky mindset that would be needed to mimic Nicolas Cage in his next film with Woo, 1997’s iconic Face/Off. (Slater would work again with Woo, too, in 2002’s Windtalkers.)

Broken Arrow is pure ‘90s popcorn bullshit, and Slater grounds the film with a toned-down version of his usual sardonic antics, an understandably aggrieved squinty gaze, and a believably scrappy physicality. Slater didn’t become an action star after Broken Arrow (unless you count his voice work on FX’s animated spy series Archer), and he would rarely play a character this straightforwardly heroic again. But his work in Woo’s film is a reminder of the reasons for his former ubiquity, the spark of unpredictability this industry used to allow in its young actors, and how Slater once operated as, in the words of Hard Harry, the dirty thought in Hollywood’s nice clean mind.

Bring Back the Oscar Host(s)

PSA: How to Tell the Sentient Doll Movies Apart

George Romero: Prophet of the Pandemic