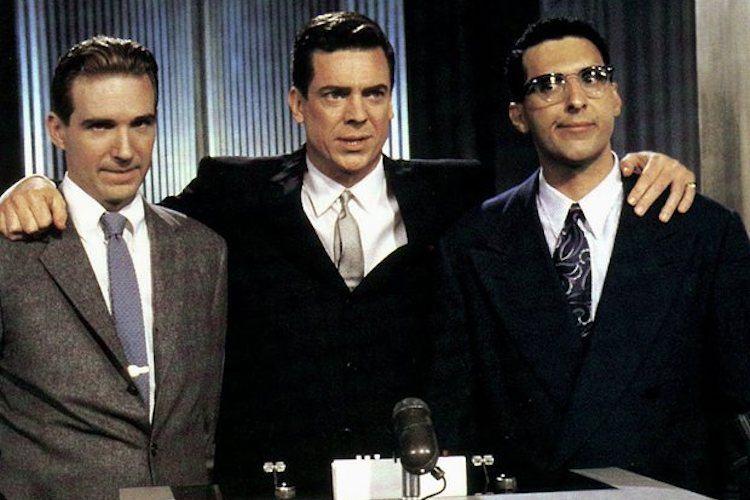 Quiz Show opens with a sale. Its first scene follows investigator Dick Goodwin (Rob Morrow) as he speaks with a car salesman about the latest and greatest Chrysler 300. He learns about its features: a state-of-the-art radio, 17 coats of paint, and more power than anyone in Washington. The salesman does his job. We never find out whether what he says is true, but that doesn’t matter. He just wants you to buy what he’s selling.

It is truth that Quiz Show, Robert Redford’s 1994 film about a television scandal from the 1950s, is most obsessed with. It’s laser-focused on the lies that TV feeds its audiences every night. Most of these lies are (or at least seem) harmless. But in revealing them, Redford suggests that there’s something rotten at the medium’s core.

The film focuses on Twenty-One, one of the era’s most popular quiz shows. The show’s rules don’t matter much. What does matter is who’s in the soundproof boxes at the show’s center, competing with one another to answer a variety of questions. More specifically, what matters is whether they connect with home audiences. That’s the reason, the film suggests, that some contestants were given the answers to questions in advance.

When Quiz Show starts, Herb Stempel (John Turturro) is being fed answers. Herb knows that he’ll keep winning money as long as Geritol sales stay high. TV is held up by its advertisers, and because Geritol is the show’s sole sponsor, its executive Martin Rittenhome (Martin Scorsese) has enormous sway.

Herb was good for Geritol. He had an “everyman appeal” that kept him coming back week after week. He won money because those in power let him. And, when he fell out of favor, that was it. He was replaced by Charles Van Doren (Ralph Fiennes), a gentle, sophisticated man from a wealthy family. Played with charm and verve by Fiennes, Van Doren is corrupted before he ever appears on the show.

The man doing that corrupting is Dan Enright (David Paymer), the show’s producer, and the film’s most pivotal character. Enright is a corporate sleazeball. He’s the one orchestrating the cheating, and he doesn’t have many reservations about doing so.

He and his partner present the cheating as nothing more than an idea. They simply float it, making sure to casually explain that it’s just another piece of fiction. After all, Eisenhower didn’t really write his book. Nobody cares what’s real. All audiences want is to be entertained.

When Quiz Show came out, 25 years ago, cable news was already a force in modern American life — CNN was founded in 1980 — but Fox News didn’t exist yet. Even so, Quiz Show gets at something fundamental about that network’s appeal. Both Twenty-One and some of Fox’s more controversial shows are entertainment that feel like the truth. On the network’s opinion shows, there’s often no distinction made between rampant speculation and fact, and viewers are left to decide what they believe. The truth can be entertaining, but when it isn’t, it can be jettisoned in favor of a lie.

On Twenty-One, Quiz Show argues, the lies are part of the show’s conception. That’s why Quiz Show’s most searing indictment is not of producers who earn big ratings by lying to their audiences but of the untouchable men who know their TV shows are lying and just don’t care.

Enright takes the fall for producing a show where he gave his contestants the answers. Dick Goodwin, the man investigating the show, doesn’t care about Enright or Van Doren. “I thought we were gonna get television,” Goodwin says after Van Doren admits his deceit. He wanted to take down the system that allowed this to happen. Instead, Enright refused to condemn his superiors when pushed in front of a Congressional committee.

Enright knows that if he’s loyal, he’ll be rehired. He’ll have to go away for a while, but when he comes back, he’ll have a job. The public has a very short memory, but corporations never forget.

The money men get off clean. They tell Congress they didn’t know anything about the cheating, which we know is not the case. They have the money, though, so they’re exonerated by their underlings. As Rittenhome points out, viewers didn’t tune in to see how many questions they knew the answers to. “They just wanted to watch the money,” he says. Audiences wanted to see how much money was won, and by whom. It’s the American dream on live TV.

When Enright testifies before Congress, he makes himself out to be the Twenty-One scandal’s only true victim. After all, audiences were entertained, the sponsors and contestants made money, and the network got high ratings. No one got hurt.

Van Doren made more than $100,000, but the movie suggests that there was something fundamentally ruinous about the way he won it. He ends up without his teaching job, forced into a quiet life as an author. When he explains to Goodwin why he started cheating, he describes it as an unrefusable deal. He was offered $25,000 and notoriety to simply answer questions he already knew he knew.

“Anyone who thinks money is just money couldn’t have very much of it,” Van Doren tells Goodwin. In Quiz Show, money is status, fame, celebrity, and power. For Van Doren, it’s a chance to prove his worth to his father. For Stempel, it’s a chance to matter at all. For NBC and Geritol, it’s the reason the lies were told in the first place.

Quiz Show is outraged by the fact that the people behind these shows don’t care what’s on them, but why should they? Redford’s indictment of television is that it’s a business, and that means it’s totally willing to corrupt itself for profit.

That corruption extends past NBC and Geritol, though. Every character in this story rots themselves out in search of a payday. Americans are expected to seize the opportunities they get, especially when they come with a compelling financial reward. Quiz Show tells us what they lose along the way. That box in your living room is lying to you.

The final image of Quiz Show plays over the closing credits. It’s a vision of a crowd watching something we can’t see and laughing at every second of it. In its final moments, Quiz Show reminds us that we’re all suckers too. We allowed TV to sell us something most of us will never be able to buy. Even worse, we enjoyed it.