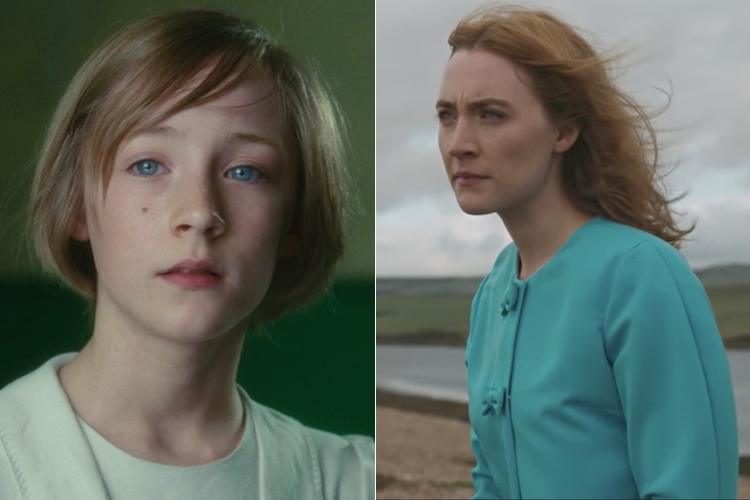 In 2008, 13-year-old Saoirse Ronan received her first Oscar nomination for Atonement, a British WWII melodrama based on an Ian McEwan novel about a fanciful girl named Briony Tallis who unwittingly unravels the lives of her sister Cecilia and Cecilia’s lover, Robbie, after accusing him of a crime he did not commit. Ten years later, Ronan stars in On Chesil Beach, based on McEwan’s novella set on the cusp of the sexual revolution in 1962. She plays Florence Ponting, a meek violinist on her honeymoon paralyzed by her fear of having sex for the first time. McEwan was immediately captivated by Ronan’s intuitive talent when she was cast for Atonement: “Even then, she showed an extraordinary ability to take control of the material, to morph from a sparky Irish kid into an upper-class English girl, with cut-glass accent to match,” he told Newsweek. In Vanity Fair, the author said he “can no longer remember these characters as I once envisioned them. Saoirse had already kidnapped Briony. And now I’ll forever see her stalking the beach as Florence.” Atonement and On Chesil Beach are the perfect McEwan companion pieces to witness Saoirse Ronan’s seamless transition from child star to grown-up actress, and her roles have intriguing similarities, despite the characters living in different eras and their ages being a decade apart.

McEwan admires Ronan’s ability “to convey a particular form of inwardness, of an imagination running riot.” That inwardness is one of the most captivating aspects of Ronan’s performances; behind her ice-blue eyes, you can sense all the thoughts, anxieties, hopes, dreams, and questions unspooling in her characters’ minds. McEwan also says Ronan has the gift of “immediate emotional insight that any novelist must envy.” Novelistic is a great way to describe Ronan’s talents because she always manages to convey huge interior feelings in minute, delicate ways. This performance style works well for her role in Atonement because the audience must register Briony’s dramatic misinterpretations of events, the careful working out in her mind what she thinks she sees.

Briony Tallis’ vivid imagination runs wild with fairy tales of princesses and enchanted chalices. She pursues her love of writing with an intense vigor, corralling her cousins to perform a play she’s written for her brother’s visit that evening. Ronan’s clipped, no-nonsense speech as she governs her unwilling participants is echoed in the scene in On Chesil Beach when Florence, a young woman devoted to music just as much as Briony is to writing, orders her beloved quartet to pick up the pace. Both characters are so dedicated to their craft that it blinds them to the realities of the outside world. Florence’s focus is not on her impending marriage but on her dream of playing the Wigmore Hall with her quartet. She does not even share the news of her engagement with them because she worries they will excommunicate her. Florence values her working relationship with the quartet far more than her romantic one with her future husband, and this largely contributes to the erosion of her marriage. As a child, Briony has difficulty separating fact from her florid fictions — and this leads to dangerous consequences. She inadvertently gets Robbie incarcerated because the idea that he was the one to rape her cousin makes narrative sense with the disconcerting events of the day: the fountain tableau, the graphic note he wrote, and his sexual encounter with Cecilia in the library. In the storybooks, it would clearly be Robbie who committed the crime. He becomes the diabolical Sir Romulous of Briony’s fable.

Ronan’s simmering performance style perfectly suits On Chesil Beach for the role of a woman crumbling beneath her rosy façade. Florence’s all-consuming tension and apprehension about consummating the marriage gives new meaning to the term “blushing bride” and looms over the room like the grey clouds of Dorset outside. Her unease radiates during their quiet dinner through her shifting feet and darting eyes — as if she’s searching for some sort of rescue. Ronan uses a similar sharp, upper-class British accent as Briony’s to convey Florence’s priggishness.

Saoirse Ronan’s delicate interiority exquisitely captures the complex and contradictory aspects of her characters: Briony’s budding sexuality and immaturity, her jealousy of Cecilia and infatuation with Robbie, Florence’s deep-seated traumas and profound remorse for not being able to fulfill her husband’s needs, her desire for his body and fear of it. This acting style personifies the sumptuous detail and intimacy of Ian McEwan’s writing. “Ian is someone who writes women incredibly skillfully, with a well-rounded perspective,” Saoirse told Newsweek. “I’d like to play another one written by him every 10 years.” Such a partnership with McEwan’s canon would produce a fascinating overarching depiction of womanhood. The roles of Briony and Florence in Atonement and On Chesil Beach are beguiling cinematic bookends of Saoirse Ronan’s journey thus far from magnificent child actress to one of this generation’s most inspiring leading ladies.