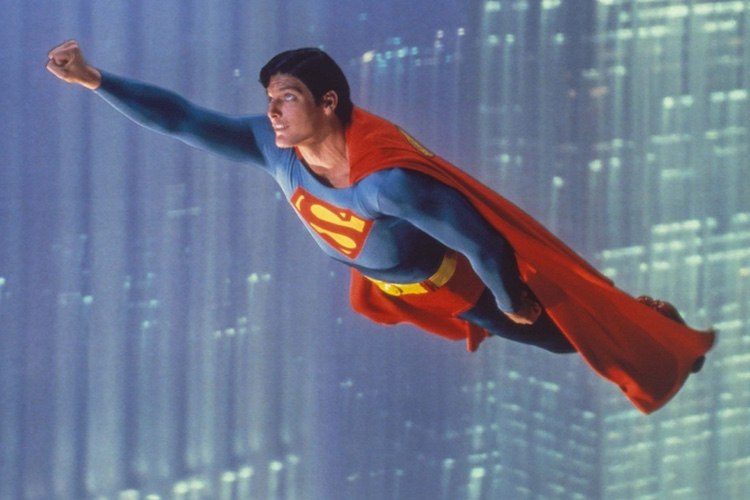 Superman (called Superman: The Movie in advertising) was released on Dec. 15, 1978, but it was supposed to come out in June to coincide more closely with the 40th anniversary of the big guy’s April 1938 comic book debut. Buried in that factoid is the realization that Superman: The Movie is now as old as Superman the character was when Superman: The Movie came out. But due to crazy ideas like filming the movie and its sequel simultaneously, the shoot took longer than expected. By the time it finally wrapped, in October, even a Dec. 15 release date was a squeeze.

— If Superman was sold out, your other options at the multiplex included The Deer Hunter, the animated versions of The Lord of the Rings and Watership Down, Halloween, The Wiz, and a re-release of Disney’s Pinocchio. The next weekend would bring Every Which Way but Loose and Invasion of the Body Snatchers.

— On TV, the Star Wars Holiday Special had recently aired on CBS, giving fans their first look at Boba Fett and their first taste of what it was like to hate something Star Wars-related.

— Mork & Mindy, WKRP in Cincinnati, and Diff’rent Strokes were all popular new shows. The top 10 shows for the 1978-79 season were Three’s Company, Laverne and Shirley, Mork & Mindy, Happy Days, Angie, 60 Minutes, M*A*S*H, The Ropers, Charlie’s Angels, and All in the Family.

— The No. 1 song on the Billboard Hot 100 chart was “Le Freak” by Chic, with “You Don’t Bring Me Flowers” by Barbra Streisand and Neil Diamond and “MacArthur Park” by Donna Summer having recently been the top songs. Also in the top 10 that week: “Too Much Heaven” by Bee Gees; “My Life” by Billy Joel; “I Love the Nightlife” by Alicia Bridges; “Time Passages” by Al Stewart; “Sharing the Night Together” by Dr. Hook; and “(Our Love) Don’t Throw It All Away” by Andy Gibb.

— Topping the New York Times best seller list for fiction was Herman Wouk’s War and Remembrance, followed by James A. Michener’s Chesapeake. For non-fiction, it was Christina Crawford’s Mommie Dearest.

— The notorious Jonestown incident, in which more than 900 people committed suicide or were murdered at the direction of cult leader Jim Jones, had happened less than a month earlier. Most of the deaths were accomplished via poisoned Flavor Aid, a Kool-Aid knockoff, giving rise to the expression “drinking the Kool-Aid.” (Flavor Aid was probably happy not to correct people.)

— Speaking of horrible murders, serial killer John Wayne Gacy was a week away from being captured (though he presumably did not know that). In San Francisco, gay rights activist Harvey Milk and mayor George Moscone had been assassinated a few weeks earlier.

— The first Susan B. Anthony dollars had rolled off the mint just two days earlier and would soon be confusing vending machines nationwide.

— Patrons of American video arcades had spent the last two months enjoying a new game called Space Invaders, still a few years away from the outbreak of Pac-Man fever.

Superman went on to become the second highest-grossing film of the year, after Grease, with which it would have competed directly if it had come out in June as planned. (Some lists have Superman in third place, with Animal House in second. Box-office reporting didn’t become an obsessively documented spectator sport until the ’80s.) In an era where superhero movies are automatic blockbusters, it’s hard to believe that Superman was a “risky” project that had taken many years to get off the ground, but it’s true. With the success of summer hits like Jaws and Star Wars, Hollywood was just getting used to the idea of expensive live-action movies aimed at young people being worth the investment. So nervous were executives about Superman that they dragged Oscar-winners Marlon Brando and Gene Hackman into the cast and gave them top billing over Superman his own damn self, Christopher Reeve.

There was no “superhero genre” to speak of in 1978. Only a handful had ever been made for theatrical release, and several of those depend on counting characters like the Lone Ranger and Zorro as “superheroes.” Superman and the Mole Men (1951) had played in theaters but was actually just the feature-length pilot episode for the Adventures of Superman TV series. The 1966 Batman movie was similarly connected to the campy TV series of that era. Apart from the old black-and-white serials and some cartoon shorts, superheroes had seldom been seen on the big screen.

So it’s interesting that Superman has so many of the features we now consider standard for the genre. There are moments of what is now called “fan service,” like when Perry White refers to Clark Kent as a “mild-mannered reporter,” or the gag where Clark discovers that pay phones are no longer found in enclosed booths. There’s the triumphant musical score — by John Williams, creating something not too different from his Star Wars theme, which by December 1978 was as familiar as “Happy Birthday to You” — as well as the embarrassing pop song on the soundtrack (“Can You Read My Mind,” the lyrics of which Lois Lane thinks, rather than sings, while flying with Supes).

He can’t read her mind, though if he could it wouldn’t be the first out-of-nowhere superpower he had in these movies.

It has the same structure as many of the origin tales to follow: first half is backstory, second half is where he puts on the suit. (Consider how rare it is for a non-sequel superhero movie to begin with the hero already in business.) The climax involves large-scale destruction, and the villain — our hero’s main antagonist from the comic books, not some secondary foe, and also the most sarcastic person in the movie — is captured rather than killed. Foreshadowing the days when New York City would be base of operations for most of our cinematic superheroes, Superman makes no effort to make Metropolis look like anything other than Manhattan, complete with a Statue of Liberty, a Rex Reed, and commuter trains that go to Yonkers and New Rochelle.

At $55 million, it was the most expensive movie ever made. Even adjusting for inflation — $210 million in 2018 dollars — it remains sizable. But it made $300 million worldwide, was nominated for four Oscars (all in technical categories), spawned a franchise, and ultimately launched the genre that now accounts for 11 of the 30 highest-grossing movies of all time. Not bad for a “troubled production” whose director was fired from the sequel.