This month saw the passing of Philip Roth, as important — and no less controversial — a figure to the field of literature as Ty Cobb was to baseball, or Pablo Picasso was to painting. Considered by many to rank among the greatest American novelists of all time, Roth also accumulated a large share of detractors throughout his 51-year career, who often accused him of purveying, rather than simply portraying, many of the themes his writing was synonymous with — namely misogyny and egomania.

As a result, Roth — both the man and the idea — became impossible to ignore, not only for readers of fiction, but also filmmakers. Beginning with the 1969 adaptation of his National Book Award-winning debut Goodbye, Columbus, Roth and his work have seen a good amount of onscreen representation, not only by way of other adaptations of his work, but also — and more interestingly — in fictionalized versions of himself.

There have been nine adaptations of Roth’s work overall, only two of which — Goodbye, Columbus and its dark double, the college-set drama Indignation (2016) — do an adequate job of capturing the spirit of their respective source material.

The rest of the these films range from the merely forgettable — including 2003’s The Human Stain (which, as Roth himself put it, “had a very impressive cast of actors and a horrendously bad script…”); 2008’s Elegy (per Roth: “I believe that was written by the same screenwriter who wrote The Human Stain, so he’s two-for-two”), and 2014’s The Humbling — to the truly ghastly, such as 1972’s Portnoy’s Complaint (Roth again: “From the best I could tell it was a movie about shouting…”) and the 2016 desecration of his Pulitzer Prize-winning American Pastoral.

Better suited to the task of capturing what makes Roth’s work so special are two films that seek to explore, if not the man himself, then at least the idea of him.

The first and most controversial of these is Woody Allen’s 1997 comedy Deconstructing Harry. It’s become increasingly difficult to discuss any aspect of Allen’s work or life without also delving into the allegations of abuse made against him — a difficulty that is increased ten-fold when considering Deconstructing Harry.

The film — which uses the memory-hopping structure of Ingmar Bergman’s Wild Strawberries to trace the history of Harry Block (Allen), a lonely, miserly novelist suffering from writer’s block (get it?) — seems as much an attempt on Allen’s behalf to explain his well-known shortcomings or public humiliations as it is an examination of the Roth persona. Whether or not this was intentional, it was unavoidable, as there are few artists as analogous to one another as Roth and Allen.

Only three years apart in age, both men rose to fame during the same period and would go on to serve as poster boys for libidinous, nebbish intellectuals of the Jewish variety (along the way earning the ire of many of their fellow Jews, who thought they were making the rest of them look bad). The best-known work from the first halves of their respective careers — Roth’s Portnoy’s Complaint (1969) and Allen’s Annie Hall (1977) — were groundbreaking comic masterpieces that mined their heroes’ neurosis and fetishes by way of psychoanalysis and meta-narrative trickery (Roth, who got there first, would always harbor a grudge against Allen, who he felt ripped him off).

Both men also underwent ugly public breakups at roughly the same time, and each had tell-all books written about them by their former partners. To make matters even more screwy, each would be linked with the other’s partner in one capacity or another — Allen cast Roth’s ex-wife, Claire Bloom, in his film Crimes & Misdemeanors (1989), while Roth was rumored to have dated Mia Farrow shortly after her break-up with Allen (beyond whatever romantic entanglement the two shared, Roth and Farrow remained good friends for the rest of Roth’s life).

In Deconstructing Harry, all of this history and notoriety is used to both hilarious and cringeworthy effect. While Allen’s film is clearly sympathetic to its anti-hero, one senses that Allen is also gleefully sticking it to Roth. This is most obvious in Allen’s casting of the actor Richard Benjamin — who starred in the adaptations of Goodbye, Columbus and Portnoy’s Complaint — as Block’s fictional alter ego.

Even with a gentle ending that convincingly makes a case for the solace of art, Deconstructing Harry remains one of Allen’s more mean-spirited films. That being said, it comes off as nothing short of gentle when compared to Alex Ross Perry’s Listen Up, Philip (2014). 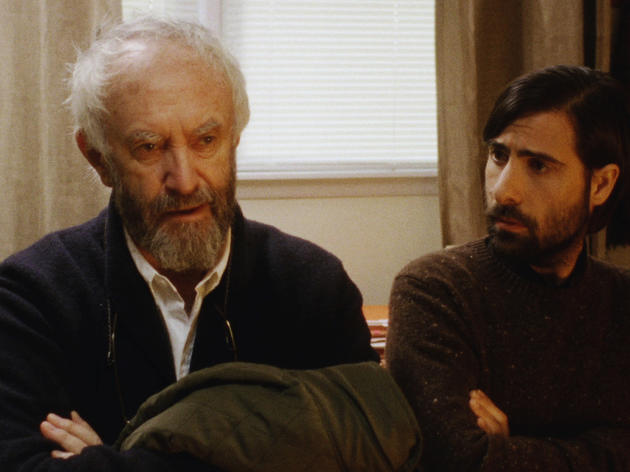 Listen Up, Philip is a brutally acerbic ensemble piece that traces several intersecting lives within the New York literary scene. At the center of the film is Philip Lewis Friedman (Jason Schwartzman), a young author awaiting the publication of his second novel, who suddenly finds himself under the tutelage of his idol, the esteemed writer Ike Zimmerman (Jonathan Pryce). Both men being massive narcissists who wear their misanthropy as badges of honor, the friendship that blossoms between the two is so outwardly toxic that it thoroughly and irrevocably isolates them from every single other person in their lives.

While the hermetic Zimmerman is clearly meant to recall Roth (who, like his fictional doppelgänger, forsook New York City for the quiet of the country), Philip shares more than just a first name with him — resembling as much in his single-minded commitment to his craft the young protagonists of Roth’s fiction as Zimmerman does the older examples throughout his later work (where, like here, they often end up regretting their self-imposed exiles).

Perry’s film doubles down on its references by way of its wonderfully evocative art design. A montage of Zimmerman’s novels (replete with dead-on titles such as Women & Madness, Bad Eating, and Audit) perfectly capture the outward aesthetic qualities of Roth’s novels over the decades. Pryce, meanwhile, does a much better job than Allen (who, as in all of his films, is essentially playing himself) in capturing the crabby, punchy, suffer-no-fools attitude that Roth was known to exhibit in interviews and public appearances.

Listen Up, Philip is not as interested in excoriating or explaining Roth’s public persona as it is using it as a foundation to examine the collateral damage that can be wrought by those who buy into it. The film abruptly switches its narrative point-of-view halfway through to focus on the women in Philip and Zimmerman’s orbit — their partners, their mistresses, their daughters — all of whom have their own lives upended simply by investing emotional support in the type of narcissists incapable of giving it back. Much has been made (and not always fairly) of Roth’s unwillingness, or even inability, to write well-rounded women, and this aspect of the film is clearly Perry’s way of commenting on this, while also expanding his own story’s scope.

Where the ending of Deconstructing Harry validates its Roth-like protagonist’s choices by siding with his all-encompassing devotion to writing (“You saved my life”, he says to his menagerie of imaginary characters during the film’s conclusion), Listen Up, Philip utterly eviscerates this same notion, the film’s final line being one of the more haunting in recent memory. In doing so, it solidifies itself as the truer of the two, at least in comparison to Roth, who never let his characters off easy, no matter how much they resembled him.

Separate from however much they succeed on their own merits, neither film serves as a very fair representation of Roth. They both focus exclusively on the controversial and problematic aspects of the Roth persona. While this is certainly fair game considering how much gold Roth himself mined from that territory, they represented only a portion of what made Roth so special.

His devotion to his craft was not some vain and destructive pursuit, but rather a serious and inspirational one. For as transgressive as his work often was, it also contained a strong moral center. And for as fraught as many of his relationships were known to be, he was also considered a kind, engaging, funny, and loyal friend (Zadie Smith’s remembrance is just one of several loving tributes published over the past few days by those who knew him personally).

Of course, it doesn’t really matter how fair or even accurate films about Roth are. They were never going to get him right, because any attempt to do so would have proven impossible in the end. As Roth himself wrote in American Pastoral:

Classic Corner: Season of the Witch

The Complicated Legacy of Dances with Wolves