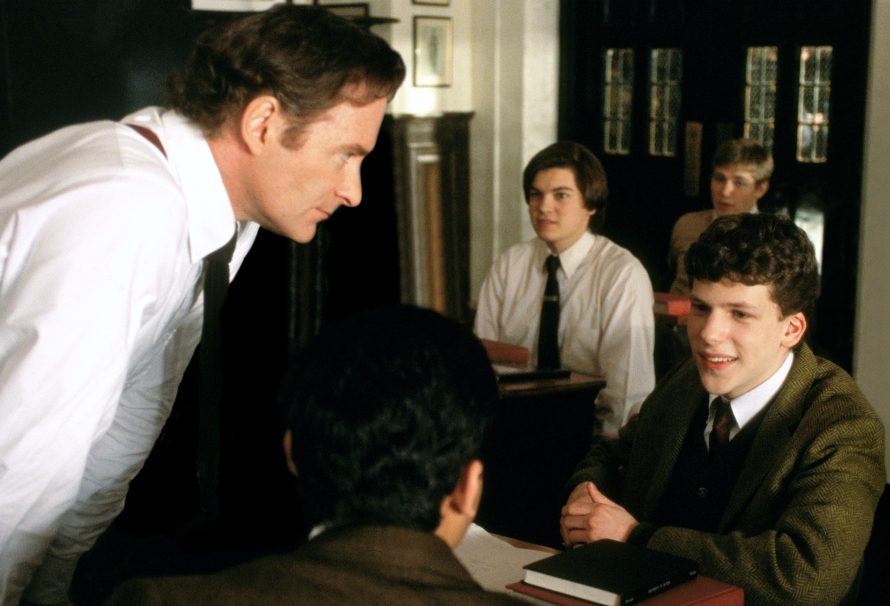 Most casual filmgoers of the non-silver spoon variety have an idea of what kind of person a traditional prep school churns out. We picture hazing, draconian punishments, and extracurricular clubs called things like the Future Business Leaders, Congressmen, and Fascists of America. If Dead Poets Society, starring Robin Williams as the iconoclastic, inspirational English teacher, challenged audiences’ perception of what a stuffy New England private school might look like, The Emperor’s Club served to confirm them. One is endlessly optimistic, even in the face of tragedy, and the other has a cynical undertone that borders on hostility. Over the course of these two films, we start at roughly the same point, but go down two wildly different paths, their trajectories defined by both the actions of teacher and student.

Mr. Keating in Dead Poets Society wanders into his English classroom on a mission to deprogram his students from a lifetime spent thoroughly embracing conformity. He connects with them and encourages them to find beauty in life, beginning with the poetry that he teaches. These are not just words on a page with a formula to be memorized, but a representation of the human soul. Although his students are entitled WASPs who will grow up to inherit the earth, they are depicted as sensitive and emotionally responsive to his ideas, especially Todd Anderson (Ethan Hawke) and Neil Perry (Robert Sean Leonard). Anderson, the son of a prominent family whose shyness prevents him from living up to their impressive legacy, and Perry, whose love for theater flies in the face of his father’s conservative, practical expectations, suffer precisely because they can’t be who the school needs them to be.

The fault lies with the system, the students mere victims who have been pressured to conform in order to meet the restrictive needs of their family and social milieu. Although the system, as represented by the administration of this prep school, ultimately succeeds in having Mr. Keating fired and the subversive element removed, the last display of respect the students show in their now-iconic “O Captain, My Captain” moment makes it clear that he has had a tremendous impact on them. We can see hope in the next generation of young people with the pedigree and social connections to run the country, that they will be better than the ones who came before, thanks to Mr. Keating’s lessons.

The Emperor’s Club, on the other hand, offers audiences no such balm. In fact, it purposefully rejects the heartwarming trajectory of the inspirational teacher trope by presenting us with a vision of an entitled upper-class teenager who is seemingly immune to any efforts to improve him. Kevin Kline’s Mr. Hundert occupies a similar position as Robin Williams’ Mr. Keating, a private school history teacher who believes in what he teaches. More than that, he knows that the boys in his class will grow up to become important men, and it’s important to him that they also become good, honorable ones. He teaches them that mere victories are meaningless, that they will fade into the oblivion of time if one does not also contribute something of value to society.

When Sedgewick Bell (Emile Hirsch), the son of a prominent senator, enters his classroom, Hundert sees his rebellious attitude as a challenge. Much as Keating does for Todd Anderson, Neil Perry, and the rest of the self-proclaimed Dead Poets Society, Hundert takes Bell under his wing. It’s clear to him that Sedgewick’s attention-seeking behavior is a result of the pressure placed on him by his high-achieving father, and he personally helps him prepare for the prestigious Mr. Julius Caesar competition. When Bell puts his nose to the grindstone and still falls short (only the top three boys in their grade are eligible to compete), Hundert makes a choice that will haunt his professional teaching career: He changes Bell’s grade on his final essay, allowing him to take the place of a different, more deserving student. His faith is proven profoundly misplaced when he discovers in the midst of the Mr. Julius Caesar contest that Bell is cheating, using crib notes in his eagerness to win without any personal effort. Decades later, he is asked to preside over a rematch, hosted by a grown Bell for charity. Hundert wants to believe that people can change, but is disillusioned once again by the discovery that Bell is still cheating, using an earpiece to have answers fed to him.

Whereas Mr. Keating in Dead Poets Society is rewarded for his faith in his students, creating a vision of an educated elite who have the capacity for deep empathy, The Emperor’s Club demonstrates the exact opposite. Mr. Hundert thinks that he is a character in an inspirational teacher film, but he faces a rude awakening as Sedgewick Bell, representative of an entitled ruling class, proves to be lazy, underhanded, selfish, and immoral at every turn. Everyone devotes time and attention, Hundert included as he sacrifices his own principles along the way, to offer Bell a smooth ride to the top. Even though he fails at becoming Mr. Julius Caesar both times, his golden parachute prevents him from facing any real consequences. He graduates despite his academic misconduct, and as an adult he uses the Mr. Julius Caesar contest as a mere springboard for his burgeoning political career.

Ultimately, the privileged students of both Dead Poets Society and The Emperor’s Club are let down by their academic institutions. The boys of Dead Poets Society are faced with a purposeful stifling of their emotional growth, while Sedgewick Bell is placed in an environment where he is never encouraged to challenge himself, because he will fall backwards into success thanks to his family legacy. Why bother improving yourself intellectually if the only merit you’ll ever need is your last name? But where Dead Poets Society offers one final moment of optimism, as the boys make a futile but moving gesture to honor their teacher, The Emperor’s Club doubles down on its class-based cynicism, with Sedgewick Bell making the choice not once but twice to lean into his privilege, confident in the fact that men like him will always land on their feet.