“Addiction is our new default,” quips Juliette Binoche’s Selena in Non-Fiction, a special presentation at this year’s Toronto International Film Festival. She’s talking about the rise of binge-watching culture changing viewing patterns, but she might as well be referring to a good chunk of the films I saw at TIFF this year. There were films that took addiction as their primary subject — Beautiful Boy, Ben Is Back — as well as others prominently featuring characters with an addiction — A Star Is Born, The Land of Steady Habits. And even when they might not be medically diagnosable, plenty of other titles — Dogman, The Hummingbird Project, Can You Ever Forgive Me?, Vox Lux, First Man — featured characters with compulsions so strong that they were often willing to stake their health, career or reputations to get their fix. (And I even left before A Million Little Pieces played!)

Not to spend too much time in self-diagnosis, but the surge in addiction and addiction-adjacent narratives could very well be the product of timing in a more socially-conscious environment. Projects greenlit around the time that the opioid crisis gained national recognition are now reaching completion. Beautiful Boy, which kicked around in development hell for many years after the source material’s publication, finally got off the ground in early 2017. Ben Is Back, produced from an original screenplay by director Peter Hedges, was announced in October 2017. They’re authentic responses to a real issue that many in the media were rightly correct to admit they did not cover nearly enough.

Beautiful Boy (in theaters Oct. 12) zooms in on the relationship between a father and a son — Steve Carell’s David Sheff and Timothée Chalamet’s Nic — to grapple with the enormity of addiction. It boils the ebb and flow of relapse and recovery into a single bond. To its detriment, the film ignores the many ways that addiction spirals outward and affects other people in their orbit. Having read David Sheff’s book, I could identify the film’s weak spots as key areas that writers Felix van Groeningen and Luke Davies omitted from the narrative. There’s the way Karen, Nic’s stepmom and David’s wife, begins to grow fearful for her younger children. There’s the tiptoeing around explaining Nic’s disorder to his siblings, who are wise enough to catch onto his erratic behavior. There’s Nic’s behavior getting so unhinged that he breaks into David’s home repeatedly, not just at rock-bottom, and even steals piggy bank money from his little brother.

Investing the full meaning of addiction into a single relationship dynamic undersells just how dramatically the effects ripple outward. Moreover, the myopia robs the triumphs in Beautiful Boy — however short-lived — of their significant heft. Kicking addiction is a victory for an entire community around the addict, and the film’s shrinking of that feat does little to distinguish its drama from a garden variety father-and-son tale.

One of the rare scenes in Beautiful Boy that breaks out of the tunnel vision occurs toward the end, when David decides to attend an AA meeting, ending his reluctance to embrace his own role in Nic’s continuing woes. There, he and Karen hear a tragic tale from a black woman whose addiction has led to calamitous ruin in her life. The testimonial, which moves them to tears, is one of the only moments when the film acknowledges how the scourge of addiction impacts people on a grand scale. In this fleeting moment (that remarkably lacks self-awareness), the personal becomes political.

That equation is made a little bit more specific in Ben Is Back (in theaters Dec. 7), which even goes so far as to make explicit reference to how racial inequality fuels America’s response to drug crises. “If he was black,” says Courtney B. Vance’s Neal of Lucas Hedges’ titular character, “he’d be in jail.” And he’s right. Peter Hedges (yes, Lucas’ dad) never loses sight of how privilege, race and class play determining factors in the way addiction stories unfold. The film starts almost as self-contained as Beautiful Boy as it chronicles the immediate shockwaves of Ben showing up unexpectedly on Christmas Eve to the joy of his mother (Julia Roberts) and the dread of everyone else. They worry that his return to the family home will trigger his worst impulses — fears that prove valid as soon as he ventures out into the community.

The journey in Ben Is Back shows how it takes a village to maintain an addict’s rehabilitation, a difficult task when so many in said village are affected by the opioid crisis. With his recovery hanging by a thread at all times, Ben depends on the good faith of the people around him to prevent him from backsliding. In just the day the film depicts, the ill will Ben engendered at the peak of his problem poses a serious threat for his future. This trouble culminates in a threat against the family that forces Ben to reach into his past and confront old demons. In the process, he and the film reveal just how wide-reaching and inescapable the problem of addiction has become. 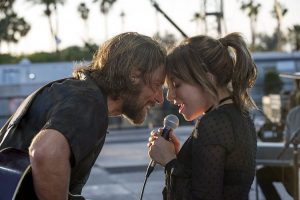 After seeing films that wrestle so fundamentally with the inescapable, all-consuming fire that addiction presents, it got harder to watch others that treated the disease more like a character trait than a medical ailment. And these were even good characters, too! Bradley Cooper’s interpretation of Jackson Maine, the renowned artist receiving his fourth reimagining in this version of A Star is Born (in theaters Oct. 5), thoughtfully uncouples the character’s alcoholism from his downward-trending career arc. Addiction is a force present at all times, high and low — the bottle is not a refuge only for a down-and-out musician.

The film’s commitment to putting his problem out front wavers, but when Cooper wants to show Maine’s affliction, the effect is searing. It’s hard to imagine that the actor’s own battle to achieve sobriety does not factor into the performance somehow. Under the gruff swagger of his macho country star, he shows real vulnerability behind those puppy-dog eyes.

Nicole Holofcener’s The Land of Steady Habits (on Netflix this Friday) features a character who could be the flip side of Jackson Maine. Thomas Mann’s Preston is young, broke, and unsuccessful — yet his addiction seems to be a thing of the past after a stint in rehab. Mann’s performance acknowledges this baggage, which especially plays out in the selfish ways he pits his divorced parents against each other, but Holofcener’s script far too often glosses over this portion of Preston’s background. For the extent to which his addiction hampered his life chances, the film’s unwillingness to get messy with its lingering effects feels like avoidance.

The character rings a bit hollow because the film’s understanding of addiction seems rudimentary when placed in conversation with these other films. Addiction is not a virus that some antibiotics can effectively purge from one’s system. (Nor is it necessarily a cancer like A Star Is Born fashions it.) An addict can put their fixations to rest, but the danger of their demons returning with increased demands never really goes away. Plus, the damage done while in the thralls of addiction can never be undone — its effects imprint themselves on the addict and the people around them.

I’m not entirely sure that I would have unleashed such a screed against characters like Jackson and Preston prior to more considered, studied films like Beautiful Boy and Ben Is Back. Should these films find an audience upon their release this fall, we could very well begin to see an overdue shift in the way filmmakers portray addiction on screen. Given the condition’s prevalence, a more nuanced understanding could help transfer empathy from the theater and into substantive change throughout the country. Next, to diversify the race, gender, and socioeconomic status of the addicts deemed worthy of our pity….

Sleepy Hollow and the Rise of Gothic Noir