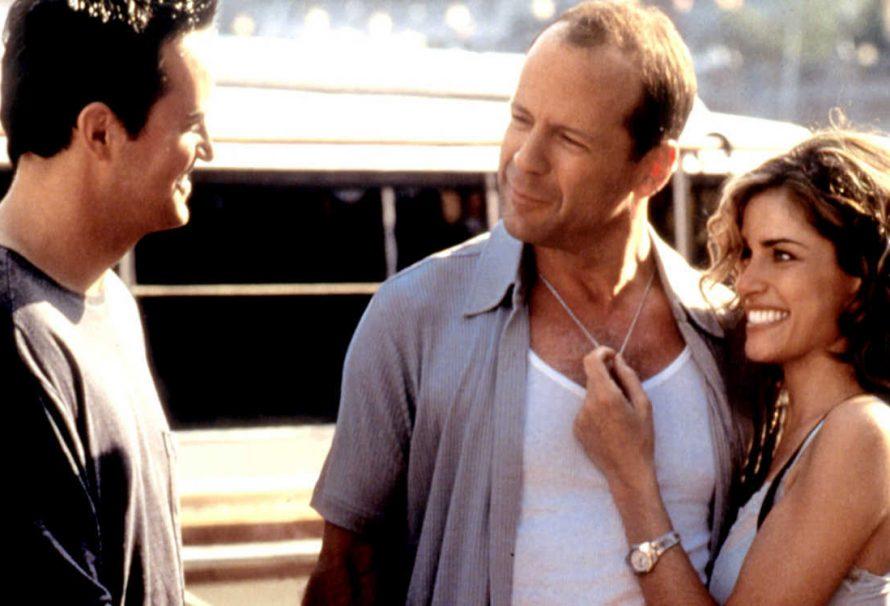 Jonathan Lynn’s comedy The Whole Nine Yards (2000), released 20 years ago this week, is a crime caper that draws much of its comedic energy from the clash of two different types of masculinity. We’re used to this from the buddy cop genre and others like it, but Whole Nine Yards applied it to a different sort of story, and to the contrasting figures of Matthew Perry and Bruce Willis.

Perry plays Nicolas “Oz” Oseransky, a dentist who lives in suburban Montreal with his wife Sophie (Rosanna Arquette) who berates him, cheats on him, and openly wants him dead. The plot is set in motion when Oz gets a new neighbor (Willis) who he soon recognizes as the notorious mob hitman Jimmy “The Tulip” Tudeski. Oz befriends Jimmy, despite being deathly afraid of him. After his wife demands he travel to Chicago to collect a “finder’s fee” from the mobsters seeking to kill Jimmy, Oz is soon in the middle of intrigue involving Jimmy’s mob rival Janni (Kevin Pollak), his ex-wife Cynthia (Natasha Henstridge), and a super-lucrative life insurance policy. Meanwhile, Oz’s assistant Jill (Amanda Peet) has professional-assassin aspirations of her own.

There’s a lot that’s very funny in The Whole Nine Yards; the script is witty and well-structured, and performances are strong across the board. But what really makes the film go is the interplay between Willis and Perry.

Perry’s Oz is a classic good-guy audience surrogate; other characters are constantly commenting on how much they like him, and what a nice guy he is. His nervousness, in the presence of this hitman with numerous murders to his name, is what drives much of the comedy — and that’s even before he begins an affair with Jimmy’s estranged wife. (“Friends,” Willis declares earlier on, “do not engage in sexual congress with each other’s wives.”) He’s nervous and neurotic, playing opposite the smooth tough guy.

Yes, it’s another story of a meek novice getting sucked into the underworld, going toe-to-toe with hardened criminals, and emerging victorious. But what separates The Whole Nine Yards from the likes of Breaking Bad is that Oz doesn’t beat the tough guys at their own game by becoming a tough guy himself. Instead, he outwits them, without losing himself; he even calls upon his dentistry skills in the climax.

To call Bruce Willis’s career uneven would be an understatement, but The Whole Nine Yards features one of his better comedic performances. There’s the way he kills a fly — seemingly with his mouth –and some truly wonderful line readings, such as “It’s not important how many people I’ve killed. What’s important is how I get along with the people who are still alive.”

The Whole Nine Yards has Willis and Perry playing heightened versions of their established screen personas, which also represent two very different archetypes of masculinity. And not only do the clashes of those different masculinities provide lots of laughs, but the positive qualities of both help them emerge triumphant in the end. After all, it’s being a nice guy that saves Oz’s life multiple times, as other characters choose not to kill him.

Also memorable is the breakthrough supporting turn from Amanda Peet, who, in the tradition of Grosse Pointe Blank (1997) three years earlier, treats the profession of contract killing hilariously matter-of-factly. Then there’s Kevin Pollak, having lots of fun delivering lengthy monologues in a wildly over-the-top Hungarian accent.

Director Jonathan Lynn also directed Clue (1985), My Cousin Vinny (1992), and the underrated Michael Richards/Jeff Daniels lawyer comedy Trial and Error (1997). The screenwriter is Mitchell Kapner, who would go on to write Oz the Great and Powerful (2013); he must have a thing for characters named “Oz.”

Most of the comedy in The Whole Nine Yards holds up two decades later, but one thing that sure doesn’t is the depiction of Sophie (Roseanna Arquette), the sort of sexist nightmare of a wife/girlfriend prevalent  in the cinema of that period. Arquette, sporting a heavy French-Canadian accent, does the best she can, but that role in particular is especially ugly stuff, as though the filmmakers thought the romance plot needed a contrast with a much worse ex.

Successful as the film was, earning over $100 million globally at the box office, it represented something close to an ending for its key players. An unnecessary sequel four years later, The Whole Ten Yards, was a notorious dud. The Whole Nine Yards was Perry’s best movie role, but it was also his last good one. Lynn only directed two movies afterward, The Fighting Temptations (2003) and Wild Target (2010). As for Willis, his career has waxed and waned numerous times in the years since. Even so, The Whole Nine Yards, which has enjoyed a long life on cable, goes down as one of the better comedies of its era.

The Whole Nine Yards is available as a $2.99 rental on Amazon Prime Video, Vudu, YouTube and Google Play, and is showing currently on Starz and Encore.

Watch This: The Old Guard

The Case For Not Going Back to the Movies for a Long, Long Time