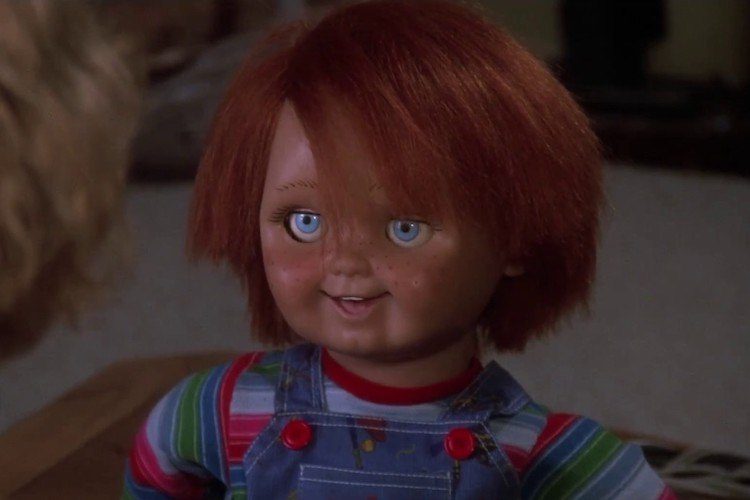 He-Man and the Masters of the Universe. G.I. Joe. Transformers. Thundercats. Smurfs. M.A.S.K. Rainbow Brite. Teenage Mutant Ninja Turtles. My Buddy. Cabbage Patch Kids. These are just a few toy lines that were popular, along with their attendant multimedia franchises, in the second half of the 1980s. Mention these names to someone who was a parent during that era, and you’ll likely conjure up memories of paychecks depleting and the annoying sight of so much branded material around their house. Mention them to anyone born between the late ‘70s and mid ‘80s, however, and you’ll likely see their eyes glaze over with blissful nostalgia, a big smile on their face as they recall days playing with action figures and nights sleeping in official bedsheets. For one group, the properties evoke feelings of stress and unease; for another, they evoke devotion, a sense of disturbingly unquestioned loyalty.

It’s this tension between the two that creator/co-screenwriter Don Mancini hoped to exploit when he wrote the spec script for what would become 1988’s Child’s Play. Mancini’s father worked in advertising, which gave the writer a unique perspective on the merchandising world of the early ‘80s when he was developing the script. Mancini was particularly influenced by the mania of the 1983 holiday season, which saw parents literally scrambling over each other to get the hot toy of that year: a realistic-looking doll known as Cabbage Patch Kids. As the decade continued, toy popularity collided and merged with merchandising, toy companies inspired by George Lucas’ success with Star Wars licensing. Popular cartoon shows such as He-Man, Transformers, and more thinly veiled 30-minute advertisements for their toy lines. The more popular the brand, the more merchandise got made, as everything from bedsheets to feature films to clothing items to food were manufactured. By the end of the ‘80s, there were dozens of properties that were inescapable.

— Child’s Play (which opened on Wednesday the 9th) took first place at the box office, beating fellow new wide releases Ernest Saves Christmas and Iron Eagle II as well as the previous week’s new films, They Live, Everybody’s All American, and the concert movie U2: Rattle and Hum.

— Also in the top 10 that weekend: The Accused, A Cry in the Dark, Mystic Pizza, and Without a Clue.

— The top radio hits that week were “Wild Wild West” by The Escape Club, “Kokomo” by The Beach Boys, “The Loco-Motion” by Kylie Minogue,” “Bad Medicine” by Bon Jovi, and “One Moment in Time” by Whitney Houston.

— U2’s Rattle and Hum, released a month earlier, reached the top of Billboard’s album charts, the first double-album since 1980 to do so. Other notable new albums this week included R.E.M.’s Green and Milli Vanilli’s soon-to-be-infamous All or Nothing (turns out it was “nothing”), plus greatest hits albums from Dire Straits, Journey, and Fleetwood Mac. An unknown band called Soundgarden had just released its debut album, too, called Ultramega OK.

— Anne Rice’s The Queen of the Damned was at the top of The New York Times fiction best seller list, ahead of Tom Clancy’s The Cardinal of the Kremlin. In nonfiction, Stephen Hawking’s A Brief History of Time was on top for the 18th week straight, with Shirley Temple Black’s new autobiography Child Star in 5th place and something called Trump: The Art of the Deal in 15th.

— “Stealth bombers” were new, and the Pentagon was just starting to acknowledge their existence. The Cold War was almost over (Estonia was in the middle of declaring its independence from the USSR) but not quite; two weeks earlier, Pres. Reagan had announced he would tear down the new U.S. embassy in Moscow because the Soviets had bugged it.

— Emma Stone was three days old and already slaying, and Zoe Kravitz had a month left in the womb. Elsewhere on the circle of life, John Carradine and Roy Orbison both had less than a month to live.

— A week earlier, Geraldo Rivera had gotten his nose broken during a taping of his daytime talk show when a fight erupted between one of his white supremacist guests and a regular guest. The lesson — don’t have white supremacists on your show because there is no reason to give them a platform — was lost on Geraldo, but it was all caught on video:

— Mystery Science Theater 3000 was less than two weeks away from its debut on local Minneapolis TV station KTMA. On network TV, Murphy Brown was about to debut, and Roseanne had just launched. Boy, they don’t make shows like that anymore, do they?

— The most popular shows on TV this season were mostly sitcoms and mostly on NBC: The Cosby Show, Roseanne, A Different World, Cheers, The Golden Girls, Who’s the Boss, 60 Minutes, Murder, She Wrote, Empty Nest, and Anything But Love.

— It was a few weeks after the Los Angeles Dodgers had beaten the Oakland A’s in the World Series, Game 1 of which had ended with a dramatic walk-off home run by Kirk Gibson that my brother talks about constantly to this day.

Although Mancini’s original script went through multiple drafts, numerous writers (including John Lafia and director Tom Holland) and production problems, the finished film retains the pointed satire that was originally intended, exploiting the dark side of the toy industry and consumerism. Early in the film, before young Andy (Alex Vincent) meets the “Chucky” doll possessed by the spirit of vicious serial killer Charles Lee Ray (Brad Dourif), he’s watching the Good Guys cartoon based on the doll line, while eating Good Guys cereal and wearing Good Guys clothing—the same outfit that Chucky and all the Good Guy dolls wear. This introductory scene establishes how much Andy’s happiness revolves around the brand, causing his mother Karen (Catherine Hicks) stress at not being able to afford an official Good Guys doll for Andy’s birthday.

There’s also something brainwashed and cult-like about the Good Guys-obsessed Andy, as he participates in activities both ritualistic (watching the cartoon while eating the cereal) and programmed (being unable to hide his disappointment at not getting a doll for his birthday when he gets a Good Guys branded tool set instead). The commercial for the doll airing during the cartoon has done its job and turned Andy into a materialistic kid — he may be swimming in Good Guys stuff, but it’s still not enough.

Perhaps the most explicit satirical jab is the film’s title card, which shows up just as the still human Charles Lee Ray seeks refuge in a toy store, spying dozens of boxes of Good Guys, a sea of Chuckys, all sporting the same creepy dead-eyed stare. The implication, that there could be multiple murderous dolls out there, wouldn’t be followed up on until 2017’s Cult Of Chucky, but it’s still there in the background of the original, making the entire brand threatening, the “Good Guys” name an ironic joke.

Child’s Play also preys on parents’ fears about toy safety, an issue that was highly topical at the time. When Chucky begins hunting down old partners of his, looking to settle scores, as well as killing those who could discover his true nature and/or get in his way, Karen has more to worry about than just potentially toxic materials or choking hazards. Initially, Andy’s response to Chucky is disturbing to her, as he claims the doll was “sent down from heaven” by his late father, and describes actions and conversations that the doll couldn’t possibly be responsible for. As a result, Karen suspects that Andy might be mentally ill, with the doll — and, of course, the entire Good Guys brand — acting as a bad influence. As the incidents surrounding Chucky continue, she has to check to see if the doll had been damaged in some way, or if it’s somehow malfunctioning. Her climactic discovery of Chucky’s missing batteries, proving that none of the doll’s movements or sounds have been electronic, plays not just as a chilling supernatural moment but as a confirmation of her worst fears — the doll is indeed broken, and in the worst way.

The bulk of Child’s Play’s third act concerns Chucky’s quest to use his voodoo knowledge to transfer his soul into Andy’s body just as he had with the Good Guy doll, a plot device that alludes to real-life monsters such as Charles Manson and even Adolf Hitler being obsessed with the occult. The rest of the franchise mostly follows the “occult/killer doll” aspects of the film, as Chucky marries an old (similarly homicidal) girlfriend whom he puts inside a doll, has a kid with her, continues to settle old scores from when he was human and finds new ways to spread his evil.

In contrast to other “evil doll” films such as Magic (1978), Dolls (1987), Puppet Master (1989) and the Annabelle series, however, Chucky’s uniqueness comes from the fact that he isn’t actually unique as a doll — he’s mass produced and marketed. Child’s Play 2 (1990) makes that clear, as Chucky is allowed to return to life thanks to the greedy PlayPals company not wishing to let their material go to waste, recycling Chucky’s possessed head into a new doll. At the beginning of Child’s Play 3 (1992), Chucky’s evil influence is given another body when the company decides to put the doll back into production. The toy company’s greed is not only directly responsible for continuing Chucky’s reign of terror, but is implicitly responsible for the allowance of multiple Chuckys in Cult, paying off what the original film only hinted at.

It’s the ties that the Chucky character and franchise have to the world of toys and marketing that help keep it alive and popular 30 years later, especially as so much of Mancini/Lafia/Holland’s satire still has relevance. The toy industry may not be as strong today as it was in the ‘80s, but it continues to exist and operate in much the same way, driving sales with multiple licensed products. Rampant, unsafe consumerism continues to haunt Walmart stores every Black Friday. Online shopping conglomerate Amazon continues to slowly build its empire, acquiring more and more separate companies. Brands and intellectual properties are perhaps stronger than ever, as movie franchises such as the Marvel Cinematic Universe and even production houses like HBO and Netflix inspire blind loyalty on a cult-like level.

That doesn’t just apply to current properties, either — the ‘80s have never truly left American pop culture since their heyday, and fans of old franchises continue to pour money into vintage or newly made merchandise, spurring rights holders to produce a new movie adaptation or series that begins the cycle all over again. What Child’s Play cleverly hit upon is the notion that not only could the inanimate object across your bedroom wish you harm, but that it also wants to own you. For many of us, “Chucky” doesn’t have to use voodoo to claim our soul — he already has it.