Armistice Day 2018 — at the 11th hour of the 11th day of the 11th month — will mark the 100th anniversary of the end of World War I, when the guns fell silent over Europe. WWI ushered in an age of profound geopolitical and sociological change. Coincident to the conflict, cinema was entering an adolescent growth spurt. A nexus between the war and cinema developed as agents of the state and agents of film realized the power that cinema wielded over the masses. Film could deliver a highly controlled message via specific messengers to a large segment of the population in a short time. It was perfect for propaganda during WWI and in the years to come. Cinema’s role as a tool to inform and shape public opinion expanded greatly during and after the war.

A very clear example of a WWI film as propaganda is Hearts of the World (1918). Motivated to fuel American involvement in the war, the British government reached out to successful American director D.W. Griffith (Birth of a Nation) for a strategic film creation. Although Griffith had access to film shot at the battlefront, he utilized very little of it, opting for staged scenes instead. Mechanized mass murder would have interfered with the glorious, chivalrous image of war the British needed him to project. Griffith said, “Viewed as drama, the war is in some ways disappointing, everyone is hidden away in ditches. As you look out over No Man’s Land, there is literally nothing that meets the eye but an aching desolation of nothingness…. It is too colossal to be dramatic!”

Instead, Griffith couches the depiction of vicious Germans invading France and the French resistance within a tale of war disrupting the lives of innocent young French lovers. Griffith strategically portrays Marie Stephenson (Lillian Gish) looking after her mother and young siblings as men leave for battle, demonstrating the need for both women and men to step up in service to God and country. While in a dream-like state, Marie goes onto the battlefield looking for her bridegroom. After finding him near the dirt road slowly dying, she spends the night sleeping beside him. This poignant scene is both chilling and sorrowful, echoed by Victor Fleming in the American civil war epic Gone with the Wind (1939).

By the time Hearts of the World was released, America had already entered the war, but the film served to boost patriotic support of the American sacrifices underway.

Nine years after the armistice, time had healed the wounds of war enough for more nostalgic endeavors. Americans were fascinated with aviation, and at the same time that Charles Lindbergh was making his transatlantic flight, William A. Wellman, a WWI combat pilot, was directing Wings (1927), a tribute to the young heroes of the U.S. Army Air Service in WWI. Wings ushered in the age of mutual exploitation between cinema and the military. Interested in bolstering Army recruitment in an American society pacified by successful completion of the war to end all wars, the Army lent Paramount 3,000 soldiers, hundreds of planes, tanks, artillery, and four bases in the San Antonio area. This contribution from the Army had an estimated value of $16 million — $232 million in today’s dollars. Add to that a budget of $2 million and a nude scene by glamorous actress Clara Bow, and the result was a blockbuster, earning the first Academy Award for Best Picture. The aerial combat sequences are the highlight of the film, and they remain marvels of choreography and cinematography, though the ground battle scenes lack the gritty realism of later WWI films. Wings, a piece of revisionist romanticism, is a prototype Top Gun (1986), complete with the rivalry of allied pilots, the death of a fellow pilot, and the love interest who evades said young pilot. 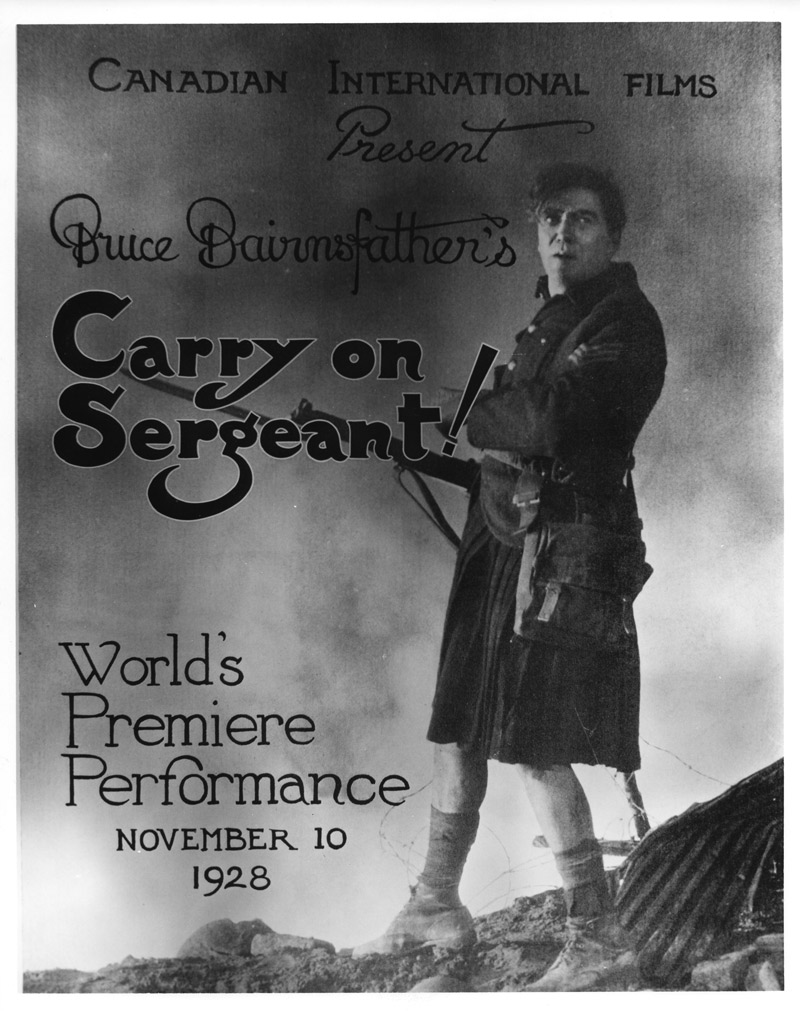 The Canadian government followed suit in helping to facilitate the production of Carry on Sergeant! (1928, no connection to the 1958 British comedy by that title). This silent film was one of Canadian cinema’s earliest and most expensive feature presentations, but it had a short run at the box office as cinema goers migrated to the talkies. It follows the arc of three men who answer their country’s call to duty. Elements match Wings, but the characters are far more flawed and less idealized. In addition, director Bruce Bairnsfather provides more than a little graphic, gallows humor to the production, likely flowing from his early work as a satirical cartoonist.

The film projects a do-your-duty message. Working man Bob MacKay (Hugh Buckler) receives his call to military service in WWI soon after marrying his neighborhood sweetheart. The narrator of the film explains that while marriage is important, duty to one’s country comes first. MacKay succumbs to the tempting presence of a French prostitute, yet redeems himself through martyrdom on the battlefield. In addition to the theme of heroic patriotic duty, the presentation of class relations is paramount in the film’s messaging. Bairnsfather features the Canadian aristocracy as the last generation of chivalrous knights who must hold evil at bay. This is evident in the knight imagery, the tearing up of the Magna Carta, and the phantom Joan of Arc leading the soldiers. The finale shows the richest of the rich on armistice night making the following dinner toast: “Gentlemen! The King!” Rich young Donald Cameron (Niles Welch) makes a second toast to all the unsung heroic working class sergeants who “silently make history by just ‘carrying on.’”

Some film producers saw the need to reexamine WWI through a pacifist lens. All Quiet on the Western Front and Westfront 1918 both from 1930, are stand-out antiwar films, each originating from a German novel. The books and films were in production at approximately the same time and are amazingly similar in plot and themes. The troops in both stories exhibit all the attitudes of the “Myth of the War” theory advanced by Princeton literature professor Samuel Hynes: alienation from the home front; bitterness toward the ruling class; the sense of war as a machine; fraternity; and most importantly, the futility of it all.

Universal Studios eagerly bought the film rights to the global best-seller All Quiet on the Western Front and assembled a well-financed American production, which won the Academy Award for Best Picture. Westfront 1918 was produced in Germany, directed by Georg Pabst and WWI veteran/actor Gustav Diessl, both of whom spent time in POW camps. Tonally speaking, All Quiet is more sentimental whereas Westfront 1918 is bleaker in outlook, owing perhaps to Pabst’s central role in the German Neue Sachlichkeit (New Objectivity) movement, which rejected romantic idealism and promoted realism. The Criterion DVD of Westfront 1918 has a 1969 roundtable discussion of a group of WWI veterans. They point out that the film’s German perspective is important because the German troops were more shocked and dismayed at the war’s end. They had entered the conflict certain of victory, yet postwar, doubted everything they heard.

Both productions employed innovative technology to heighten the realism of the battle scenes. All Quiet employed the boom crane camera shot interspliced with a machine gun POV mowing down ranks of men. Westfront 1918 advanced the recording and synchronization of sound for chaotic battle scenes. This greater realism aids the audience’s ability to comprehend the conflict’s senselessness and futility.

There are three primary similarities between the plots of these films. In each, the main characters return home on leave from the front only to realize that they no longer feel connected to the people and places of home. They prefer to return to their colleagues on the front rather than deal with the psychological confusion of their old civilian world. Both films also have poignant soliloquies in which a soldier expresses greater affinity for a dead enemy than the rest of the world. Finally, both incorporate powerful images of an outreached, supplicating hand of a dead man to signal the desperate grasp of the fallen, beyond help or hope.

Evidence of the propaganda power of these two films lies in the fact that numerous countries banned them. After they seized control of Germany, the Nazis banned both films. Australia, Poland, Italy, Austria, and France banned them for varying periods of time. Major Frank Pease, head of the Hollywood Technical Directors’ Institute, labeled All Quiet on the Western Front anti-military propaganda and advocated banning it in America. The American Legion threatened to picket screenings of it due to the film’s sympathetic treatment of the Germans.

Joining American, German, and Canadian filmmakers in their production of WWI films, French director Jean Renoir made La Grande Illusion in 1937. Like Wings, La Grande Illusion plays up the aviation aspect of the war. The main characters are not cogs in an industrial military machine cowering in muddy trenches against artillery and fate; they are knights of the sky who battle nobly, man to man. A surreal scene at the film’s beginning has a German pilot dining with the two French aviators he has just shot down. La Grande Illusion is Renoir’s proposition that the bond and power of the European aristocracy is preferable to the nationalistic mob mentality of the fascist regimes. La Grande Illusion appeals to the sense of duty of civilized society to stop the coming disaster (World War II) before they lose everything. Renoir incorporates a cautionary subplot against anti-semitism. This was Renoir’s self-initiated propaganda, not sponsored by any government.

While La Grande Illusion was a rather light, yet still potent film, 20 years later, Stanley Kubrick’s Paths of Glory (1957) premiered with a darker tone and stronger antiwar message than preceding WWI films. This was Kubrick’s attempt to grab the attention of a very jaded, war-weary public. By the time Paths of Glory premiered in 1957, the world had suffered through WWII and the Korean War and was now teetering on the brink of thermonuclear destruction in the Cold War. The film mirrors a historical event, which took place on the western front in 1915. Gen. Mireau (George Macready), representing the actual Gen. Giraud Reveilhac, orders his own artillery to fire on the French troops, cowering in the trenches, to force them to attack the Germans. As actually occurred, four corporals, chosen from the ranks at random, face conviction on counts of mutiny and gross cowardice, followed by execution. Kubrick’s gruesome portrayal of war is consistent with the images evoked in Cobb’s novel of the same title. Cobb contended, “The only available effective antiwar propaganda that I know is photographs of butchered bodies, the more horrible the better.”

In anticipation of Armistice Day, I invite film fans and history buffs to view or re-watch these great WWI films. They merit our attention, not only in recognition of the sacrifices of those who fought to protect our freedom, but also as stellar examples of film’s persuasive powers. I look forward to seeing Peter Jackson’s colorized 3D WWI documentary, They Shall Not Grow Old (due later this year). As Jackson said, “[The men] saw a war in colour, they certainly didn’t see it in black and white. I wanted to reach through the fog of time and pull these men into the modern world, so they can regain their humanity once more.” The interpretation of WWI in the hundred years since it ended history has not been black and white, though particular films and books may have a pro-war or anti-war slant. By experiencing a breadth of WWI films, moviegoers may more fully grasp the lasting impact of the war.