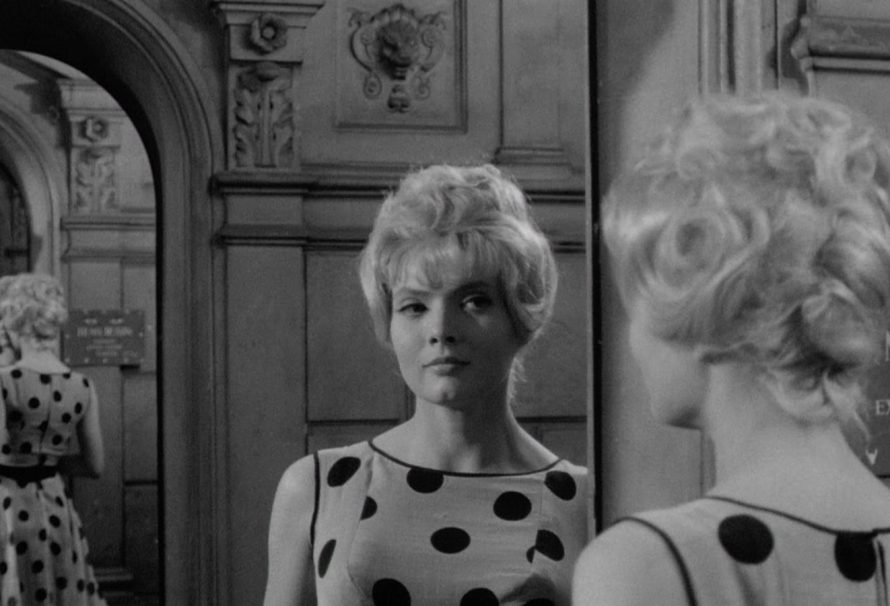 The duality that defines Agnés Varda’s Cléo from 5 to 7 is present from, quite literally, its opening frames: a title sequence in which our protagonist goes for a tarot card reading, and the writer/director both lays out the themes that will consume her interest for the next 90 minutes, and sets a style of winking playfulness that would seem to run counter to the serious subject matter. Varda slaps credits over the face-down cards, keeps the faces of her characters hidden for several minutes, and cheerfully intermingles color and black-and-white photography; she’s having a demonstrably good time, as so many French filmmakers of her era did. But the client is having her cards read because she fears she has a serious illness, and after she leaves, the reader whispers to her husband, “The cards spell death, I saw cancer. She’s doomed.”

So Cléo from 5 to 7 – one of the centerpieces of Criterion’s new comprehensive Varda box set, and currently streaming on the Criterion Channel and HBO Max– sets for itself the seemingly impossible goal of being a lighthearted examination of certain death. Even more impossibly, it succeeds.

“I’ll know for sure this evening,” explains Cléo Victoire (Corinne Marchand), a modestly successful young singer, who worries that her stomach pains are a symptom of something more serious. “This evening” she’ll get her test results back, confirming either a case of cancer or a case of hypochondria, and she has some time to kill in the interim, time she’ll spend alternately fretting, commiserating, shopping, running errands, “resting,” entertaining visitors, drinking, sulking, and flirting.

Some of this time is spent in the company of Angèle, her worrying, superstitious companion – officially her maid, but also something of a personal assistant and confidante. Varda compellingly explores this complex, love/hate relationship – they both care for and exasperate each other, in roughly equal proportion, and it’s frankly not hard to sympathize with Angèle; Cléo comes off, early on at least, as something of a brat. She paints herself as at death’s door, but she does so while literally riding on an in-home swing in her swanky apartment, or lounging in her ornate bed.

“She just wants attention,” sneers Bob, one of her musical collaborators, while arriving for a visit (and rehearsal), and a moment like that – one of the few in the film in which her subject is off-screen – is telling. Varda will grant Cléo’s hunger for melodrama, while allowing that it can co-exist with the dismissals of those around her; Angèle and especially Bob discount her pain, real or imagined, because it’s easier that way. When Cléo declares, “Everyone spoils me” and “No one loves me,” she is, yes, looking for attention. She’s also not getting it otherwise.

Again, the distance between subject and style is striking; Varda’s set-up is urgent, but not her execution. Cléo’s conundrum is, quite literally, a matter of life and death, but the character (and the filmmaker) keeps engaging in little sidebars and bits of chit-chat – because everything is not at the service of a plot. The manner in which Cléo rolls with whatever Varda throws her way gives the picture a welcome, off-the-cuff quality. Yet Varda will happily deceive us with the quality as well, as in the magical moment when she slyly moves from a casual piano-side rehearsal into a full-on, full-emotion musical number, and then shifts right back again. The character is on a clock, but we can wander from it; the little timestamps that Varda inserts as on-screen text, part of her diligent “chapter” headings, become more of a check-in, a tick-tock, an occasional reminder of the news awaiting her at the end. And it doesn’t only remind the viewer; occasionally those frames seem to jolt Cléo herself.

She finally, fleetingly escapes to nature, with a freewheeling frolic through the park, an escape that turns into a bit of a Meet Cute. The film’s third act is something of a proto-Before Sunrise with a handsome stranger, a soldier on leave who’s on his own deadline, heading out shortly after Cléo gets her long-promised news. The anonymity of this encounter brings out her vulnerability, and thus, her kindness. A bit of honest human interaction changes her entire outlook; near the end of the film, she groans to him,  “We have so little time,” but then, moments later, in the same tone, “We have plenty of time.” It’s all relative, you see. The meticulousness of the timestamps in the chapter headings are a fake-out, an indicator of precision and micromanagement. But some things are simply out of our control, and in the course of the day, certain events cannot help but alter our perspective.

Real life, Varda whispers, will always interrupt. Cléo’s story is never just Cléo’s story; when she’s out in public, Varda layers in snippets of nearby, overheard conversations, a gentle suggestion that this is just one of many lives playing out every day in every space, each submerged in its own drama. But her subject is Cléo, and by the conclusion of this extraordinary film, we’ve seen this woman experience fear, pain, joy, anger, and least likely of all, hope. She’s allowed that complexity. Varda’s friend and fellow French filmmaker Jean-Luc Godard, who would release his third feature the same year as this one, famously said, “The only way to criticize a movie is to make another movie.” And if that’s true, that may very well be what Varda was doing in Cléo from 5 to 7: creating the kind of fully-realized female character that her French New Wave contemporaries rarely bothered to envision.