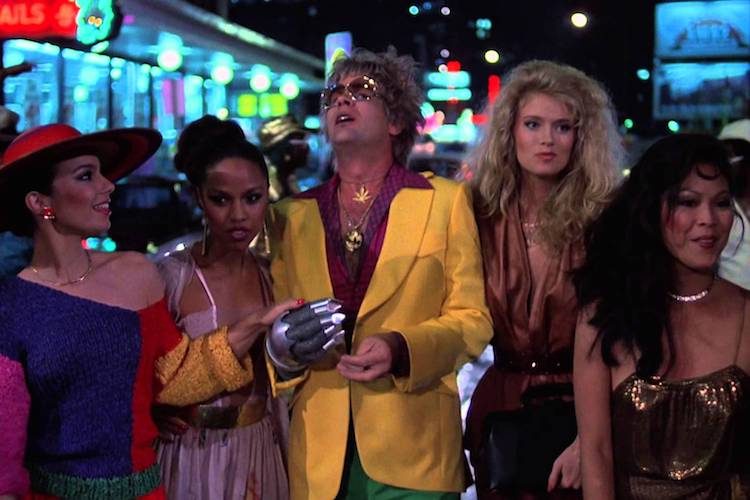 My brother and I like to bother each other and those around us with a game of soundtracks: When a deep, dark cut from a movie comes on the radio, one of us will turn to the other, smile like an executioner looking for a fresh neck, and ask:

And the name of the movie is right there in the lyrics.

Devo’s “Doctor Detroit” manages a feat long thought impossible — a Devo song, as distinct as that is by default, that leaves no impression at all.

This is a metaphor.

For a comedy about a comparative literature professor posing as a proto-Beetlejuice pimp to protect a gang of lovable prostitutes, it’s blandly strange. For Dan Aykroyd’s first solo act, it’s strangely bland.

By the dawn of 1983, the former Saturday Night Live star and soon-to-be Ghostbuster wasn’t exactly box-office gold. Few actors have the good fortune to make their (American) big-screen debut in a Spielberg movie. Fewer have the bad luck of that movie being 1941. The Blues Brothers (1980) turned his fortunes around, but not by much. The legendarily troubled production hobbled to a modest success despite an unusual handicap: Blues Brothers reached less than half of the usual theaters because exhibitors didn’t think white people would see it and certainly didn’t want black people seeing it in white neighborhoods. Neighbors (1981), a deranged sitcom of a movie in which Aykroyd plays a bleach-blond, blue-eyed implied-Nazi-next-door, earned less on twice as many screens.

Doctor Detroit was Aykroyd’s first movie after John Belushi’s death, and his own shot at leading-man status. But unlike Belushi’s Continental Divide, the quaint romantic comedy tailor-made to play him against his mythic life-of-the-party type, the Doctor leans right into the quirky passions of its star.

Aykroyd plays Clifford Skridlow, a medieval lit study guide with legs. Very nice legs, as the movie reminds us multiple times. We meet Cliff power-walking the length of Chicago to the zipper-synth sound of Devo’s somehow-forgettable title song. In red short shorts, watching sweatband-mounted rearview mirrors, with a technique like a flamingo still learning to walk, Aykroyd is his own special effect. The stunning display catches eyes from a passing limo and its occupants: a pimp named Smooth Walker (Howard Hesseman) and the four prostitutes who work for him.

It’s the first coincidence in a plot constructed of almost nothing but, held together by complication and force.

See, Smooth is in deep with Mom, the Godmother of Chicago with an army of bald chauffeurs at her command. An off-handed reference to them as “Yul Brynner clones” is both accurate and one of Doctor Detroit’s best jokes, so adjust your expectations accordingly. When Smooth is boxed-in on the highway by four of these limo-driving goons, he’s forced to answer for a whole lot of money he owes Mom. So he does what anyone would do and pulls a Usual Suspects on her, creating a fictional super-pimp out of the junk hanging on her wall, like an enormous calendar that says DETROIT and a picture that happens to have a doctor in it. The newly christened Doctor Detroit has her money, see? Only he doesn’t exist. But when Smooth and the ladies happen to choose the same Indian restaurant as Cliff, it’s only too obvious: Smooth will take him out for a night on the town, let him have his naïve fun with the ladies, drug him into the next plane of existence, tell the ladies he’s a new business partner, then run away to Hawaii so Cliff can clean up the mess.

A tale as old as time. At least as old as a year prior, when Ron Howard’s Night Shift told the same story. And it would be told again a few months later in Risky Business. Considerate Pimp was a valid career choice in the early 1980s. Life was easier then. Zanier, even.

Ol’ Cliff, explicitly credited as an “expert in honor,” steps up to protect the prostitutes by becoming the infamous Doctor Detroit. With a white fright wig, borrowed from a suit of armor and wardrobe dyed in dripping Technicolor, the bad (in a good way but also a bad way) Doctor looks like one of the middle shots of a Trying On Goofy Costumes montage. He’s equal parts shock jock, pirate, and second-string SNL character. And he only shows up in about three scenes.

I remember seeing the TV edit of Doctor Detroit as a kid. Until I watched it again, as one of those faded afternoon movies on HBO, it garnered the same vague warmth I hold for discontinued gummy snacks and lost squirt guns; I think it was great, but not as great as I think.

Doctor Detroit is too self-conscious to work as a sex comedy, not risky enough to work as an R-rated comedy, and so scattershot it barely works as any kind of comedy. Without hesitation or prior inclination toward theatrics, the meek Clifford adopts a complete Kentucky-fried persona to convince a similarly Southern judge to let off one of the prostitutes. And because it is any kind of comedy from the early 1980s, it gets unnecessarily racial. When the judge realizes the prostitute he just let off is black, he demands Cliff be charged with “impersonating a cracker.” An awards show for pimps is openly held in the ballroom of a posh hotel, across the hall from a banquet for academics, and you best believe our hero is expected at both. There’s also a scene, only one, where Cliff explains exactly what he’s thinking to himself while lying in bed alone.

Yet you can still see exactly why Dan Aykroyd jumped on it. Clifford Skridlow is a dry run for the stiff-collar yuppies and pure-hearted nerds in his immediate future. He rattles off lines with the precision and speed of a laser printer. It was an Aykroyd trademark even on SNL, but this is where he first weaponized it. Cliff is Aykroyd at his most calculator-brained obsessive, what drove him to deliver a first draft of The Blues Brothers at well over 300 pages with descriptions of everything from car engines to Catholicism. The Doctor, a figure so immediately legendary that James Brown devotes a song to him on the spot, is Aykroyd’s impossible alter ego. The blues fan who became a blues act who played with blues icons. The ghoulish spirit whose only directorial effort would be a Texas Chain Saw Massacre riff with room for an extended Digital Underground cameo.

Rosie Shuster, an original Saturday Night Live writer and one-time girlfriend of Aykroyd, laid him out better than anybody: “Danny’s epiphany would be to commit a crime and arrest himself.”

Doctor Detroit, if nothing else, is an imperfect showcase of that split. Cop and criminal. Professor and pimp. And it makes a convincing case as to why he never quite headlined a movie on his own again. His contemporaries, Chevy Chase, Bill Murray, occupied that vast middle ground. Every role was more reflection than invention, and that led to some of the greatest Smug-Bastards-You-Still-Kind-Of-Like ever put to celluloid. But how do you reflect Dan Aykroyd, a man who studied seminary at the same time he was taking improv classes?

His next movie, hitting audiences only a month later, would provide a clue. In Trading Places, Eddie Murphy would play the reflection, and Dan Aykroyd would play the invention, an ignorant cartoon of upper-crust privilege.

And he’d give it his impressive all. Just like the Doctor.

It’s currently fading on the constant afternoon of HBO GO, but it’s already been fading for 35 years. Besides Aykroyd’s infectious conviction, there’s little reason to watch a comedy so dated it ends on a joke about a crusty old man marrying a prostitute and getting into Republican politics.