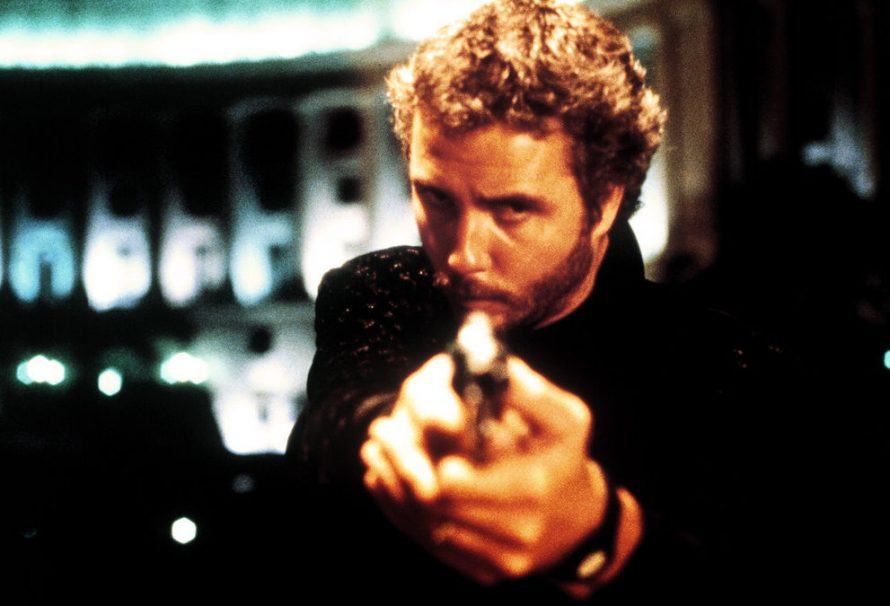 On the night of September 16th, 1984, Crockett and Tubbs cruised a jet-black Ferrari Daytona convertible into pop culture immortality to the tune of Phil Collins’s “In The Air Tonight.” Miami Vice did the impossible – it took MTV seriously. Hill Street Blues veteran Anthony Yerkovich and budding big-screen director Michael Mann tapped into a pastel vein of New Wave cool, establishing once and for all the decade’s enduring aesthetic shorthand. The first season alone scored 15 Emmy nominations and four wins. Soon, everybody wanted a beach-front piece of Miami, even if it meant battering best-sellers written long before the show into familiar-enough shape.

Lawrence Block opens 8 Million Ways to Die with the kind of clipped dive-bar poetry that crime novelists fictionally kill for: “I saw her entrance. It would have been hard to miss.” So says Matthew Scudder, Block’s most enduring creation, in his fifth whiskey-spiked mystery as a disgraced former cop and disgraced current private investigator. On the page, he’s as much an archetype of noir as his surroundings, a New York City that’s 80% shadows and 20% fire escapes.

In the process of adapting 8 Million Ways to Die for the big screen, between Oliver Stone’s original script and Robert Towne’s uncredited rewrites, the setting moved west to sunny Los Angeles. The opening credits fly across the city, smog blushing by dawn’s early light, overcooked synth struggling to sound like anything else but Jan Hammer’s Vice score, as Jeff Bridges tries to make the title sound like casual human conversation. The most interesting scene (and one of the few with director Hal Ashby’s human touch) comes shortly thereafter, when Scudder’s daughter finds him passed out shirtless on the median that separates their house from the highway. After that, it’s all stretch marks.

Ashby only took the project because of the Alcoholics Anonymous subplot. When the producers fired Ashby for making an Ashby movie, that was the first material to hit the cutting room floor. Scudder’s entire descent into addiction is dealt with in voice-over and out-of-focus headlights. A relapse is headed off by a jumpcut to Scudder waking up in rehab looking ghoulish but no functionally worse for wear. What’s left is a collection of agonizing two-shots in which Jeff Bridges and a pubescent Andy Garcia yell at each other until one of them can figure out how to improvise their way out of the scene. The peak of entertainment here is when Garcia threatens, “Why don’t I fuck you from here?” and Bridges asks, “What are you, Rubberman?”, all while menacingly crunching on snowcones produced from Garcia’s trunk.

Hal, a documentary on the late legend’s career, leaves 8 Million Ways to Die out of its montages the way portraits leave out pimples. It made under a million dollars across 215 theaters for its opening weekend. Tragically, it would be Ashby’s last movie, despite hopes of directing the wildly popular work of another criminal mastermind, Elmore Leonard’s LaBrava.

By the time 8 Million Ways opened and closed in 1986, Michael Mann had pulled back from active Vice detail. He stuck around to executive produce the rest of the series, but after setting the tone and establishing the only rule – no earth tones – he had other ideas. One, capitalizing on his small-screen heat, was Crime Story, a series that would premiere later that year. Another was his third theatrical feature, a hopeful rebound from 1983’s The Keep, based on a promising paperback.

Red Dragon, Thomas Harris’s second novel, was received well enough at the time, but most of its acclaim only showed up in the rear-view mirror. The “forensic procedural” genre wouldn’t find a captive audience until the premiere of CSI: Crime Scene Investigation (which shared a star) almost 20 years later. Likewise, Manhunter, eventually sold as the first appearance of Hannibal Lecter after Silence of the Lambs made him a household name, wouldn’t get any credit until the decade that bleeds through every frame was long dead.

Manhunter abides by most of Michael Mann’s rules for Miami Vice, though he does allow for some browns among his neon greens and chlorinated blues. The difference is in the effect. Michel Rubini’s score sounds, at times, like Jan Hammer played backwards. The pop songs are too dissonant, too moody to make the Top 40. Dante Spinotti’s cinematography, the stuff that movie subreddits are made of, turns every scene into a hyper-saturated Hopper painting. The powers that be wanted Jeff Bridges for the lead, but Mann dug in his heels over up-and-comer William Petersen, star of the Vice-transcendent To Live and Die in L.A.. If Crockett is a breathing extension of his Art Deco environs, Petersen’s Will Graham is well-dressed skeleton in a series of very chic closets. He’s an open wound barely stitched together with cold, conditioned procedure. If Graham is ever mistaken for cool, it’s only by defensive imitation.

Despite the volume of digital ink spilled in its honor, Manhunter landed with a thud only four months after 8 Million Ways to Die. To quote the Los Angeles Times, in the film’s most common complaint, “Maybe it’s too much Miami Vice for Mann.” This critical refrain, that Manhunter was too Miami for its own good, strangely enough came alongside the show’s highest ratings, peaking at number nine in the 1986 Nielsens. Stranger yet, that devoted home audience never made its way to the theaters, letting the purest Vice-alike lose millions.

Mann’s other series, Crime Story, never hit that kind of high, but its feature-length premiere later that year was good enough to score theatrical distribution, thanks in no small part to the direction of proud indie provocateur Abel Ferrara. As part of the same Elmore Leonard renaissance that connected LaBrava with Ashby, the author’s 1982 novel Cat Chaser found its way to Ferrara and star Peter Weller, both avowed Leonard admirers.

By the time Cat Chaser limped straight to video in 1991, three years after it was shot, Miami Vice was already two years cancelled. The pastel-and-palm-tree shtick was dated déjà vu, down to the 4:3 squeeze for projection TVs.

Matter of fact, the best way to enjoy Cat Chaser is as a feature-length pilot for a Vice spin-off starring Peter Weller as a Miami hotelier with a shadowy past. Only it seems more like a late season, when we’re already supposed to know why Charles Durning is playing a homicidal heavy like the mythical Fourth Stooge. The only giveaway that this wasn’t meant for small screens is the equal opportunity nudity. After producers lopped off half the movie, that nudity is about all that’s left of note, save the narration provided by an actor who is not in the actual movie. It is, with little exaggeration, the worst ever recorded. Given Leonard’s well-earned reputation for dialogue, it feels personal when the voice-over goes like this: “He had to believe he and Mary could make it, which was certainly a lot of make-believe.”

The fabled three-hour cut has screened a few times at New York City arthouses in recent years. Word is it’s an improvement. But as it imperfectly exists, Cat Chaser is an 80-minute endurance test in just how much entertainment you can squeeze out of Peter Weller brooding in billowing slacks against watercolor sunsets and Kelly McGillis being lit exclusively across the eyes like a supermodel Dracula. The only winner in the bunch was Elmore Leonard, who made $1,000 a page for rewrites and never bothered to learn the producers’ names. Like the other novelists, he didn’t have much to say about the finished product. To them, they were compromised causes lost.

Despite its legacy as the fashionable ambassador of an entire decade, Miami Vice went out of style almost as fast as it came in, too fast for even the copycats to stick their landing. But that’s alright. The books are better anyways.

Up All Night with George Clooney: From Dusk Till Dawn at 25

REVIEW: SuperFly Remake Takes the ‘sploitation out of Blaxploitation

20 Years Later, the Truth About X-Files: Fight the Future Is Still out There