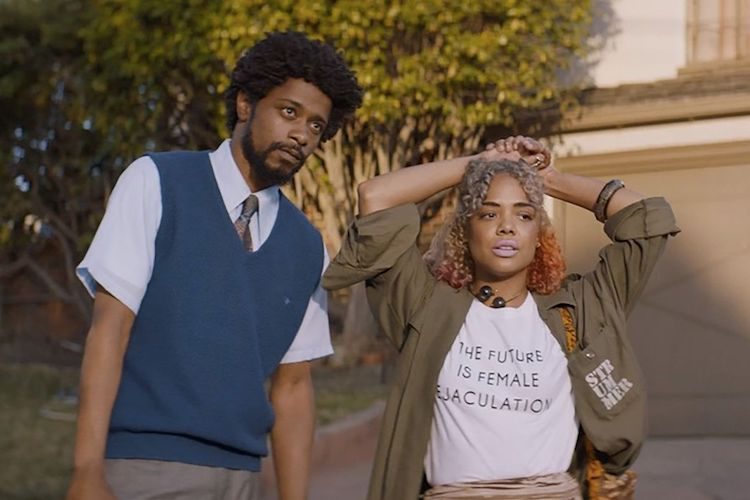 It would seem rapper and activist Boots Riley watched a few Michel Gondry movies (Eternal Sunshine of the Spotless Mind, Be Kind Rewind, etc.) and decided to make a whimsical, alternate-reality satire of his own. It’s called Sorry to Bother You, and it is indeed his own. Though the inventive visual style and narrative absurdity will remind you of Gondry (not to mention Spike Jonze and Charlie Kaufman) and the social commentary has a Spike Lee influence, Riley’s playful, rabble-rousing story is unique — warts and all, pretty impressive for a first-time filmmaker.

Lakeith Stanfield stars as Cassius Green, a black Oakland man who gets a much-needed job as a telemarketer and finds that the key to sales success — and thus to advancement in the company — is to use a “white voice” on the phone. (His white voice is dubbed by David Cross; Patton Oswalt provides someone else’s.) Cassius’ militant performance-artist fiancée, Detroit (Tessa Thompson), does NOT care for the white voice and is further disappointed when Cassius, offered a promotion, turns his back on his unionizing co-workers, who are led by an agitator named Squeeze (Steven Yuen).

Cassius’ sudden and complete betrayal (just yesterday he was picketing with them) feels unmotivated and out of character, but don’t worry, he’ll learn the error of his ways. Now working upstairs with the “Power Callers” — white voice at all times, please, even among co-workers — he’s making great money and getting in good with the higher-ups. Trouble is, the product he’s selling now is essentially slave labor. A corporation called WorryFree promises poor people housing and food if they sign their lives over to the company; in return, they get three hots and a cot and just have to do whatever physical labor is demanded of them by WorryFree or by the third party that has contracted their workforce through savvy salesmen like Cassius.

So far everything is a bit dystopian and marked by flights of fancy (as when Cassius imagines himself physically dropping into people’s homes when he interrupts their dinners), but the story is down to earth: Cassius is conflicted about his new success, and Detroit isn’t sure she wants to be with him anymore. Things soon turn bizarre, though. Protected by private security guards, Cassius breaks the picket line every day to do his Power Calling, where he’s mentored by another black man (Omari Hardwick) whose first and last names are bleeped out anytime someone says them (and who also, incidentally, wears an eyepatch). Then Cassius meets the CEO of WorryFree, Steve Lift (Armie Hammer), a coked-out lunatic who reveals his plans for his workforce. Those plans are, um, unorthodox. It gets crazier from there.

Riley’s themes of reform and progress are frequently underscored by examples of physical transformation. Changing one’s voice to make sales is just the beginning. When Cassius gets a raise, his garage apartment turns into a swanky pad right before our eyes, new furniture magically growing out of the old (kudos to the prop department). Steve Lift’s outrageous plan — which he shows Cassius by way of an educational claymation video directed by “Michel Dongry” — likewise involves physical changes.

That those changes correspond with stereotypes about black men’s bodies points to Riley’s interest in racism, though he’s not as invested in that angle as the others. Cassius is one of only a few black employees at the telemarketing firm (Danny Glover plays another, by the way), but it’s not till he connects with Steve Lift that he’s hit with a full blast of racism. That scene, in which Steve and his wealthy white party guests ask Cassius to rap and he dazzles them by repeating “N***a s**t, n***a s**t, n***a n***a n***a s**t,” mocks the casual racism of clueless liberals the way Get Out did, only without the bite. Not that you need a good reason to make fun of racism, but this and the other racial aspects of the film seem underdeveloped.

Funny and inventive though the film is, it runs out of creative steam before it’s over. The weirder the plot gets, the more sporadic the jokes are. And I’m not sure where the line is between “portraying a version of reality that’s loosely defined” and “being inconsistent in your world-building,” but I think Riley crosses it. Yet Lakeith Stanfield and Tessa Thompson’s performances are both excellent — he’s deadpan and baffled, she’s righteous and angry — and Riley is generally spot-on in his targeting of race, class, and capitalism. There’s a good chance his sophomore effort will be even better, so enjoy this one while your brain can still handle it.