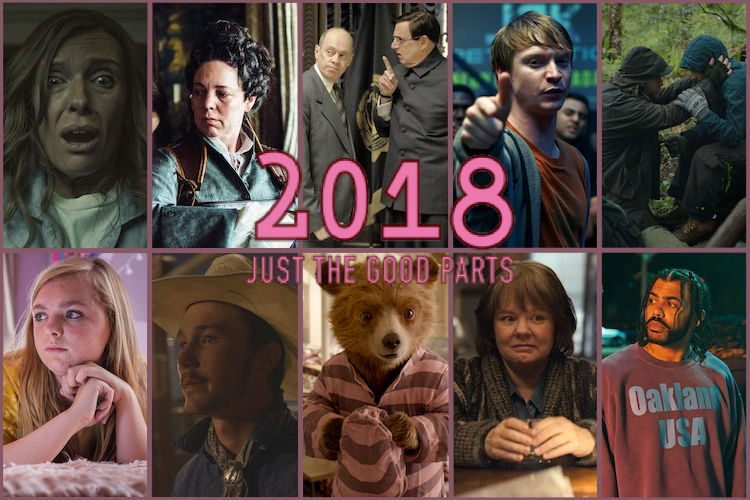 The usual disclaimers apply: I didn’t see every movie, I’m an idiot who doesn’t know what he’s talking about, etc. I note that four of the 10 were directed by women, and nine of them were “festival movies,” premiering at Toronto, Sundance, or Telluride. There were a lot of excellent movies in 2018, but these are my top choices.

For fun, I’m including excerpts from the notes I took during the movies. I apologize if this is not, in fact, fun.

First of all, I can’t blame anyone for not liking this movie. It is ROUGH. Long will I remember the midnight screening at Sundance, when a packed theater recoiled in shock and horror at a particular moment about 38 minutes in. (If you’ve seen the movie, you know the moment I mean.) During the glory days of MoviePass — when you could use it to see movies — I saw Hereditary for a third time just so I could watch the audience’s reaction to That Moment and a few others. I was not disappointed. But beyond shock value, this meticulous and dread-filled debut feature from writer-director Ari Aster delves into the terrors parents and children inflict on one another, with a central performance by Toni Collette whose equal I didn’t see all year.

This loosely fact-based account of two women competing for Queen Anne’s attention in early 1700s England is very dark and very funny (that’s not the last time you’ll see a movie on this list described that way) and marked by fantastic performances by Emma Stone and Rachel Weisz as the would-be favorites, Olivia Colman as the queen. Every time I think I’ve decided on Stone being my personal favorite, I remember some detail of Weisz or Colman’s work that makes me reconsider. It’s director Yorgos Lanthimos’ least weird, most accessible film (you should see the eyes go wide on people who’ve never seen anything else of his when you tell them that), but also his most thoughtful and resonant.

3. The Death of Stalin

cuss out the burning corpse of a political enemy

I think if I were Russian I would be offended by this movie, in which the murderous reign of Stalin — something that many people are old enough to remember — is treated with cavalier dark humor by filmmakers who aren’t even Russian. How dare they, you know? As a non-Russian, I find it hilarious, another excellent political comedy by Armando Iannucci (In the Loop, HBO’s Veep) that treats greedy, inept, wicked men like buffoons. To borrow a phrase applied to another horror, it shows the banality of evil by reducing political strivers to their basic elements. Oh, and it has everyone in the cast speaking in their native accents, including Steve Buscemi as Khrushchev. I don’t care where you’re from, that’s funny.

how far is too far?

Joseph Kahn’s explosive comedy about a white college student who becomes a battle rapper premiered at the Toronto Int’l Film Festival way back in September 2017 (I saw it at Fantastic Fest the next month) and wasn’t released until over a year later. I worried that it was so of-the-moment it would lose its power by the time it came out, but I was happily mistaken. Kahn satirizes a number of hot-button topics with shotgun-like efficiency, all in the service of a story that’s structured like — and is every bit as exciting as — a sports movie.

“The same thing wrong w/ you isn’t wrong w/ me”

This is another one that I saw at Sundance in January and kept thinking about all year long. Unlike Hereditary, though, it stayed with me because of its loveliness and compassion. The story of a PTSD-addled widower (Ben Foster) and his 13-year-old daughter (Thomasin Harcourt McKenzie) living off the grid near Portland is heartbreaking yet life-affirming, dealing with people in precarious circumstances but not focused on misery or despair. Debra Granik (Winter’s Bone) is an insightful filmmaker who should be given whatever resources she needs to make whatever movies she wants.

“I feel nervous all the time”

The most surprising thing about this painfully funny, all-too-real depiction of what it’s like to be a girl in 8th grade is that it was written and directed by a man — a comedian, no less, former YouTube star Bo Burnham. How he relates so well to the specific perils of middle-school girlhood, I don’t know, but the terrific central performance by then-14-year-old Elsie Fisher certainly helps. She’s so endearing and natural that for a while I feared she was a non-actor who’d been tricked into embarrassing herself on camera (she’s not, and she wasn’t). It’s the only movie this year that made people squirm as much as Hereditary did, albeit for wholly different reasons.

all you can do now is live in the past

Speaking of people making insightful movies on a subject you wouldn’t think they’d know much about, Beijing-born Chloe Zhao’s intimate and understated drama about an injured South Dakotan rodeo rider is quietly devastating. She actually did use non-actors, with real cowboy Brady Jandreau playing a role based on his own experience of nearly being killed and having to contemplate the possibility of never getting on a horse again. Jandreau’s naturalism works to the movie’s advantage, conveying sensitivity and humility by revealing his true feelings. There’s a lot of heartbreak and humanity on display here.

“I am tickled the deepest shade of shrimp”

For pure, wholesome, unfiltered joy, nothing in 2018 came close to this delightful sequel about the polite young bear who gets into gentle scrapes in the friendliest neighborhood in London. Paddington (voiced with tenderness by Ben Whishaw) is a CGI creation, but he’s surrounded by earnest, committed actors — Hugh Grant, Sally Hawkins, Jim Broadbent, Hugh Bonneville, et al. — who treat the material with as much respect as their more “important” roles. The open-hearted sincerity and goodness are contagious. If you aren’t charmed by this movie, there’s something wrong with you.

9. Can You Ever Forgive Me?

not a people person

Melissa McCarthy gives a career-best performance in Marielle Heller’s fact-based movie about a surly writer who stumbles into a scheme of forging letters from literary figures and selling them to collectors. McCarthy has played frumpy, pathetic characters before, even unlikable ones, but here she shows emotional depth that we haven’t seen before. She’s assisted by Richard E. Grant as her flamboyant, mismatched friend and fellow alcoholic, the two of them comprising one of the year’s best duos as sad, broken figures helping each other get better. But don’t worry — the warm moments never get in the way of the movie’s curmudgeonly heart.

Like Hereditary, this was a Sundance premiere where the ending was too much — too far-fetched, too stylized, in this case — for a lot of viewers. It’s an incendiary but thoughtful racial comedy about a black man (Daveed Diggs) trying to get through his last days on probation without getting screwed up by his irresponsible white friend (Rafael Casal), all while grappling with the fact that he just witnessed a police shooting of an unarmed black man. For me, the intense finale (which relies on an extraordinary coincidence) is saved by Diggs’s magnetism and righteous anger, and I was moved by the character’s emphatic plea to be seen for who he really is.

Really Good Movies That Might Have Made the List If I’d Compiled It on a Different Day:

Roma
We the Animals
You Were Never Really Here
Mission: Impossible — Fallout
Won’t You Be My Neighbor?
The Guilty
Spider-Man: Into the Spider-Verse
Widows
Free Solo
A Quiet Place
Hearts Beat Loud
Upgrade

Movies I Didn’t See That I Am Led to Understand Are Quite Good:

THE WORST MOVIES OF 2018 THAT SHOULD HAVE KNOWN BETTER

I’m not including some low-budget, independent things that were lucky to get released and are best forgotten. What I am including are well-financed products that were given wide release despite being terrible, which deserve to be scorned and mocked. In alphabetical order: